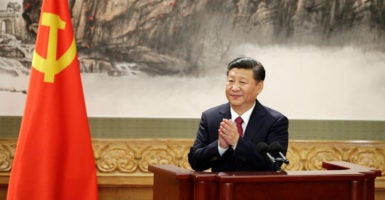 Chinese Communist Party General Secretary Xi Jinping spoke at the 19th Party Congress in Beijing, where he outlined a vision for Chinese policies over the next few years. (Photo: Jason Lee/Reuters/Newscom)

While his precise policies are unlikely to be revealed before the Third Plenum of the 19th Party Congress early next year, his recent speech to the Congress provides some likely indications of the general direction.

Relying on the State, Not Markets

In the speech—which lasted over three hours—Xi emphasized the role of state-owned enterprises in helping China achieve its goal of becoming a “moderately well off society” by 2021.

These enterprises will be the centerpiece of efforts to expand China’s finance, telecom, and energy sectors. China will rely on markets more as a means of allocating resources than as a driver of growth.

While indicating that the market should help set interest rates, he stressed that Beijing “must develop the public sector.” To this end, state-owned enterprises will become “stronger, better, and bigger.”

This comes in sharp contrast to the era of General Secretary Jiang Zemin and Premier Zhu Rongji, when Chinese leadership sought to reduce reliance on state-owned enterprises and embraced the market more fully.

Xi’s speech also put to rest any hopes that Chinese economic development would create a middle class that might press for political reform and liberalization. Such hopes will likely go unfulfilled in the next five years.

Xi’s comments about Hong Kong, Taiwan, and the internet all make clear that he does not countenance much in the way of political openness.

For instance, he said the goal of national rejuvenation would be “wishful thinking” if it is not spearheaded by the Chinese Communist Party.

Rather than follow the path of other nations, Xi said China should pursue its own political approach, especially since “no one political system should be regarded as the only choice.”

To support this, the internet will be subject to tighter controls, so as to limit the damage from “erroneous viewpoints.” “Patriots” must play the main role in leading Hong Kong and Macau.

His comments on Taiwan were met with strong applause:

We will resolutely uphold national sovereignty and territorial integrity and will never tolerate a repeat of the historical tragedy of a divided country. All activities of splitting the motherland will be resolutely opposed by all the Chinese people. We have firm will, full confidence, and sufficient capability to defeat any form of Taiwan independence secession plot. We will never allow any person, any organization, or any political party to split any part of the Chinese territory from China at any time or in any form.

These comments give little prospect for greater respect for human rights, transparency, or open exchange of ideas. They also suggest a likely further hardening of policies toward Taiwan.

Beijing has already suspended all official communication and dialogue with Taipei. Xi’s comments suggest that not only is he unlikely to change his stance, but that he may well increase pressure in his second year.

In order to maintain that pressure, and to defend China’s ever more expansive territorial claims in the Western Pacific, Xi also made clear that the ongoing military modernization effort would not be slowing down.

He charged the People’s Liberation Army with being able to not only fight future wars, but to win them. This would require the army to be able to engage in not only conventional operations on land, sea, and air, but in new theaters, such as outer space and information/cyberspace.

He also made clear that China would not budge from its territorial claims, such as in the South China Sea. He flatly declared, “China will never advance itself at the expense of the interests of other nations, but we will never give up our lawful rights.”

He said China will not yield on issues that “damage our sovereignty, security, and developmental interests,” which align with Beijing’s concept of “core interests.”

To this end, he reaffirmed China’s commitment to maintaining its outposts and artificial islands in the South China Sea and the sustained development of China’s navy to defend its maritime interests.

Coupled with the elevation of figures such as Wang Huning, the Chinese Communist Party’s ideologist, to the Politburo Standing Committee, the 19th Party Congress has provided little reason thus far to think that Beijing will soften its stance, either domestically or abroad.