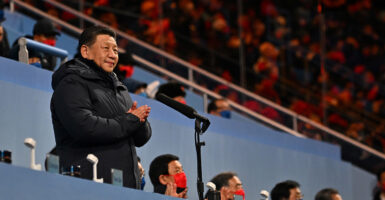 When you’re praising the Chinese Communist Party instead of America, something has gone terribly wrong. And yet that’s what many on the radical left are doing, preferring to prop up a genocidal regime over their own country.

Savannah Guthrie of NBC gave fawning praise to the regime for selecting a Uyghur athlete to participate in the 2022 Winter Olympics opening ceremonies in Beijing.

“This moment is quite provocative. It’s a statement from the Chinese President Xi Jinping to choose an athlete from the Uighur minority,” mused Guthrie. “It is an in your face response to those Western nations, including the U.S., who have called this Chinese treatment of that group genocide and diplomatically boycotted these games.”

At best, this is a neutral stance on an issue that has been firmly settled. The Chinese Communist Party is actively engaged in genocide against Uyghur Muslims in Xinjiang. This is not up for debate.

At worst, Guthrie’s words play off as jeering the Western countries critical of a murderous, bloodthirsty regime. One imagines her saying, “Take that America! China is pushing back against your silly accusations of genocide!”

But Guthrie wasn’t the only leftist media ghoul to suck up to Chinese premeir’s Xi Jinping’s regime.

During NBC’s coverage of the opening ceremonies, Browne crowed, “This was a riposte to President Joe Biden for skipping these Olympics and a message to the West: China won’t be lectured to on human rights, or on any other issue.”

Browne’s comments are deeply despicable, but also deeply telling. The phrase “won’t be lectured to” evokes the image of an angry school smarm chiding her class. Browne seems to be implying it’s inappropriate for America to chastise the regime for its evil behavior.

On Feb. 6, Chinese dissident artist Badiucao posted on Twitter that he was being censored by George Washington University in the nation’s capital. Badiucao posted a series of posters on the university’s campus that were critical of the Chinese Communist Party. In response, university president Mark Wrighton sent out an email claiming to be “personally offended” by the posters and launched an inquisition to find the person responsible.

Wrighton did end up having the posters removed from campus. However, after receiving immense backlash from Badiucao’s supporters, Wrighton backpedaled on his statements and declared he had acted hastily. But the message was already well received. The head of a major American center of learning saw something critical of the Chinese Communist Party and immediately acted to censor it.

America is in an ideological war with a new evil empire. The harsh repression of Uyghurs at the hands of the Chinese government is one of the great moral failings of the modern era. It is our duty as lovers of freedom to forcefully and repeatedly call out this evil whenever possible.

The fact that leftists like Guthrie, Browne, and Wrighton would rather play defense for the Chinese Communist Party is shameful. As journalists and academics, they should know better than to bend the knee to Xi Jinping and his goons.

While it’s impossible to dive into the heads of the trio and know exactly why they refuse to speak the truth about China’s crimes against humanity, Browne’s previous fawning writing about the current Chinese leader speaks volumes.

The obvious conclusion is they are themselves communist sympathizers who see what China is doing as a net positive versus the capitalist West.

Browne and his fellow leftists are wrong, of course. But their support for China’s murderous government is playing right into the hands of Party.

It’s Xi Jingping’s dream. Why do the work to destroy America when America will do it for you?