‘This Is Bigger Than Sports’: As Olympics Near, NBA Star, Lawmaker Speak Out Against China 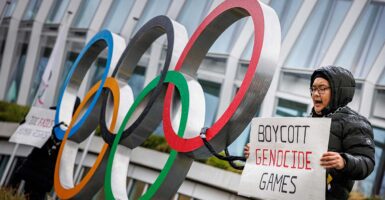 The Winter Olympics, set to open on Feb. 4 in China, are causing a Texas lawmaker and an NBA basketball star to ask whether entertainment is worth the price of turning a blind eye to human rights there. Pictured: Tibetan activists protest in front of the International Olympic Committee headquarters in Lausanne, Switzerland, on Dec. 11. (Photo: Valentin Flauraud/ AFP/Getty Images)

As the world awaits the start of the Winter Olympic Games in Beijing on Friday, a Texas congressman and pro-democracy activist Boston Celtics basketball star Enes Kanter Freedom are speaking out on China’s human rights abuses.

Rep. Michael McCaul, R-Texas, said the U.S. has to ensure its athletes’ safety and send China a stronger message.

“Whether its their deathtrap diplomacy through the Belt and Road Initiative; their brutal oppression of Hong Kong; the looming threat they pose to Taiwan; their COVID-19 cover-up that turned what could’ve been a local epidemic into a global pandemic, killing more than 6 million people worldwide; or the genocide they are committing as I speak against ethnic and religious minorities, the CCP has committed some of the most horrific crimes of our time,” he said.

The Texas lawmaker said the International Olympic Committee turned “a blind eye” to human rights abuses by allowing the Games to be held in Beijing.

“The IOC allowing what I’m calling the ‘Genocide Games’ to go forward is a stain on the Olympics, and I am deeply disturbed that these Games will take place under the shadow of concentration camps,” McCaul said, adding:

Glorifying the CCP and normalizing their genocide is simply unacceptable. And putting U.S. Olympians in jeopardy as they travel to China is unacceptable.

McCaul said he supported a diplomatic boycott as a way to send Beijing a message while protecting U.S. athletes’ opportunity to compete.

“We can root for Team USA without giving the CCP a propaganda opportunity and victory to spread lies and whitewash their crime,” he said. “And if our Olympians speak out against the CCP’s atrocities, the State Department should ensure that they are protected.”

Freedom, the Celtics’ 6-foot-10 center—who became an American citizen on Nov. 29, legally changing his name by adding the new surname at the same time to mark the occasion—said a diplomatic boycott would be a step in the right direction, but not enough.

“A diplomatic boycott is good. Obviously, it shows something, but it is not enough to me. You know, I feel like all the athletes out there need to say, ‘Enough is enough. This is bigger than sports,’” Freedom said, adding:

All the gold medals in the world that you champion are not more important than your morals, your principles, and values.

I feel like all the athletes need to stand up for something bigger than basketball and say, ‘I’m not going to participate … in a country where there’s a genocide happening.’

Freedom said that although the problem begins with the International Olympic Committee, “athletes have a huge voice, and they need to use it.”