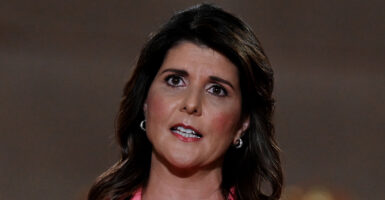 “We have to fight for these people who can’t fight for themselves,” says former U.N. Ambassador Nikki Haley, pictured speaking Aug. 24, 2020, at Mellon Auditorium in Washington, D.C., during the Republican National Convention. (Photo: Olivier Douliery/AFP/Getty Images)

As the U.S. begins to compete at the Summer Olympics in Tokyo, former U.N. Ambassador Nikki Haley is making it clear that America needs to boycott next year’s Winter Olympics in Beijing.

Haley supports a boycott of the games as a response to the Communist Chinese government’s human rights abuses against Uyghur Muslims and other ethnic minorities in the Xinjiang region, which the U.S. has recognized as genocide.

“The physical and sexual abuse that’s happening to women and children, the forced labor … it’s unthinkable,” Haley said in an exclusive interview with The Daily Caller News Foundation. “We have to fight for these people who can’t fight for themselves.”

Agnès Callamard, secretary general of Amnesty International, called the conditions a “dystopian hellscape” after the organization’s 2021 report found that the Chinese government was engaging in “state-organized mass imprisonment, torture and persecution.”

Another report released by the Newlines Institute for Strategy and Policy in March concluded that China’s communist regime “bears state responsibility for an ongoing genocide” against the Uyghur people.

Haley wrote an op-ed for Fox News in February comparing the situation to 1936, when the U.S. competed at an Olympics hosted by Nazi Germany. She wrote that the U.S. would not have attended those games if it had known the atrocities that German Chancellor Adolf Hitler was planning. She reiterated that comparison in the interview.

“That was the biggest propaganda victory for the Nazis,” Haley said. “Why are we going to do that for China, when they gave us COVID? When there’s literally genocide happening right in front of us?”

Haley added that she found it “disgraceful” that “companies like Nike and Coca-Cola would boycott the state of Georgia, but won’t do anything against China.”

To her, the only reason people aren’t “getting up in arms” is because there are “corporate financial interests that are involved.”

Haley isn’t alone in calling for countries to boycott the Olympics come 2022. Several human rights groups issued a joint statement in May asking all governments not to go to Beijing and compete, while former Vice President Mike Pence last week told an audience at The Heritage Foundation that the location for the Olympics needed to be moved, as The Hill reported.

“President [Joe] Biden should make a clear and unequivocal demand that the 2022 Winter Olympics be moved from Beijing unless China comes clean on the origins of COVID-19 and immediately ends persecution of the Uyghur people,” Pence said.

But not all Republicans have taken Haley’s side of the argument. In a separate Fox News op-ed, Sen. Ted Cruz, R-Texas, insisted that “athletes should go to Beijing next year proudly, bring home medal after medal, and show the world what it means to compete on behalf of a free society.”

Sen. Mitt Romney, R-Utah, wrote that denying American athletes their life’s dream would be the “easy, but wrong, answer” in his own op-ed for The New York Times.

“It’s not OK to say ‘Oh, let’s just go fight and win some medals and that’ll make everything OK,’” Haley told The Daily Caller News Foundation. “Anyone that says that we should just go ahead and fight the good fight at the Olympics and turn our backs on genocide is not remembering the atrocities that have happened in history.”

“My heart goes out to the athletes, and I know that our athletes represent all that is free and is great about America,” she added. “But I know if they heard the stories of these people, I know if they saw the abuses, they would see where we’re coming from.”

The last time the U.S. boycotted the Olympics was when the Soviet Union hosted the games in 1980. President Jimmy Carter decided to lead an international boycott after the Soviets invaded Afghanistan, but the choice proved to be largely unpopular and failed to hurt the host country as intended, Politico reported.

Haley admitted that she does not believe a boycott will “suddenly change Chinese Communist behavior,” but said that isn’t the reason she’s pushing for it.

“The point is whether America and freedom-loving people around the world should promote or condone what’s going on in China. And our participation would do that,” Haley said.

“Don’t underestimate, in this time where China wants to show this great big win by hosting the Olympics, the one thing that stops that is when every news story talks about how the U.S. boycotted,” she added.

President Donald Trump, who appointed Haley as U.N. ambassador, came under pressure to take stronger actions against China for its treatment of the Uyghurs during his administration. But Trump admitted to Axios in 2020 that he didn’t sanction the communist regime because he was “in the middle of a major trade deal.”

When asked if Trump should have taken more forceful steps to stop the human rights violations against the Uyghurs, Haley said she wasn’t going to discuss the past “with either Trump or Biden.”

“I think what’s important is what do we do now,” she said. “Whether it’s a current president or former president or any elected official or people in between, call them out, let’s boycott the Olympics.”

“That’s the right, moral thing to do, and we should be at the forefront of that,” she said.