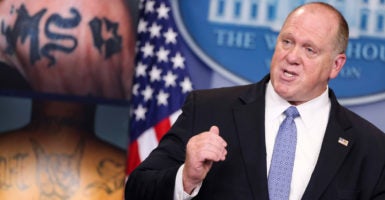 Thomas Homan, acting director for Immigration and Customs Enforcement, speaks at the White House in July about combating gangs. ICE is clashing with some local jurisdictions that refuse to cooperate in detaining illegal immigrants arrested on other charges. (Photo: Oliver Contreras/Sipa USA/Newscom)

“Sanctuary” policies haven’t kept federal immigration authorities from doing their job, but there have been numerous cases of local jurisdictions refusing to cooperate with Immigration and Customs Enforcement detainer requests.

In some cases, those released have been charged with murder and other crimes.

Sanctuary jurisdictions are cities or counties that have formal policies that prohibit local law enforcement officials from cooperating with federal immigration authorities.

“We’ve noticed some horrible cases in recent months that we are finding out about in part because the Trump administration thinks the public should know about it,” said Jessica Vaughan, director of policy studies for the Center for Immigration Studies, a think tank that supports strict immigration laws. “There is a clear trail of avoidable crimes that can be traced back to these sanctuary policies.”

ICE asserts that it is prioritizing criminal aliens in deportations, noting in numerous press releases that, since January, 70 percent of ICE arrests have been of convicted criminals. Seventy percent of the remaining individuals not convicted of a crime have either been charged with a crime, are immigration fugitives, or have been removed from the United States and illegally re-entered.

Here are some recent examples of cases where local governments didn’t cooperate with ICE—and the consequences.

Once again, a noncooperative jurisdiction has left their community vulnerable to dangerous individuals and preventable crimes. ICE lodged a detainer against Jesus Gonzalez with Sonoma County Jail officials in October 16, following his arrest on felony charges for maliciously setting fire to a property.

This is especially troubling in light of the massive wildfires already devastating the region. Over the past year, ICE has lodged detainers against Mr. Gonzalez after four separate arrests by Sonoma County on various felony and misdemeanor charges. ICE was never notified of Mr. Gonzalez’s various releases.

Additionally, Mr. Gonzalez has been returned to his home country of Mexico on two separate occasions. The residents of Sonoma County, and the state of California, deserve better than policies that expose them to avoidable dangers.

Noncooperation policies—now enshrined in California state law—ensure only one thing: Criminals who would otherwise be deported will be released and left free to reoffend as they please.

In a statement to the media, Sonoma County Sheriff Rob Giordano said the ICE director’s statement was “inaccurate, inflammatory and damages the relationship we have with our community.”

“ICE attacked the sheriff’s office in the midst of the largest natural disaster this county has ever experienced,” Giordano said. “ICE’s misleading statement stirs fear in some of our community members who are already exhausted and scared.”

In another controversial case, the Sonoma County Jail wouldn’t give ICE custody of illegal immigrant Nery Israel Estrada Margos, who was behind bars for felony domestic battery. He was released after making $30,000 bail on Aug. 2.

A little more than two weeks later, on Aug. 18, he turned himself in to police after beating up his girlfriend Veronica Cabrera Ramirez.

Giordano blamed ICE for not picking him up sooner, according to the Santa Rosa Press Democrat newspaper. However, The Daily Caller reported the sheriff’s office only provided 16 minutes’ notice.

The Denver Sheriff’s Department claimed it lacked the authority to hold Ever Valles, 19, a Mexican national, who was released from a Denver jail in late December. In February, state prosecutors charged him and another defendant in a murder and robbery.

After Valles was arrested, ICE placed a detainer with the Denver County jail to hold him until federal agents could take him into federal custody, but it says the detainer wasn’t honored, and Valles was released from jail without the federal government being notified.

ICE had been tracking 18-year-old Erick Garcia-Pineda, who is accused of fatally shooting a community activist in San Francisco during a robbery in August.

The San Jose Mercury News reported Garcia-Pineda had been detained by immigration authorities in December and released from custody in April pending deportation.

It’s not just the West Coast that has experienced the phenomenon. New York City legislation forced the closure of the ICE Criminal Alien Program set up at Rikers Island prison.

Gurnam Singh, 21, a citizen of India in the United States illegally, had been arrested on charges of assault, forcible touching, sexual abuse, and harassment, according to an ICE press release. The arrests came after an ICE detainer request was ignored.

Singh was arrested by ICE officers on Oct. 16, following a series of arrests by New York law enforcement and an ignored immigration detainer. On Dec. 26, 2016, New York City police arrested Singh on misdemeanor charges, but released him, only to rearrest him days later on charges of criminal contempt. He was released from jail on bond Jan. 11. Then, on June 15, Singh was again arrested by New York police on charges of criminal contempt, assault, criminal mischief, and harassment.

After his arraignment on June 21, he was again released from custody on bond. He was arrested again on Sept. 6 on local charges, and local ICE officials lodged an immigration detainer and warrant of arrest with Queens Central Booking, which went unanswered. It wasn’t until Oct. 16 that ICE deportation officers arrested Singh in Elmhurst, New York, on immigration violations.

New York City released Marco Freiire, 42, a citizen of Ecuador, despite a detainer request following his July 4 arrest on charges of assault, criminal possession of a weapon, harassment, and menacing. On Oct. 16, ICE arrested Freiire outside of his residence in Brooklyn on immigration violations.

In late September, ICE announced 498 individuals from 42 countries had been arrested across the United States over a four-day period.

“Operation ‘Safe City’ focused on cities and regions where ICE deportation officers are denied access to jails and prisons to interview suspected immigration violators or jurisdictions where ICE detainers are not honored,” a press release from ICE said.

The operation took place across 10 jurisdictions, with 100, or nearly 20 percent, of the arrests in Los Angeles alone.

According to ICE, some of the offenses included:

·In Baltimore, a citizen of El Salvador who entered the U.S. illegally on a fraudulent passport, and was previously charged with attempted murder/conspiracy to commit murder and convicted of first-degree assault. She was previously released from local custody before ICE could assume custody.

· In Boston, a citizen of India who entered the U.S. illegally and who was convicted of indecent assault/battery on a person over 14 and was required to register as a sex offender.

· In San Jose, California, a citizen of Mexico who entered the U.S. on a visa and overstayed that visa for more than 10 years. He was previously convicted of felony possession and purchase of narcotics, possession of a controlled substance for sale, and felony child cruelty with the possibility of injury or death. He was previously released from local custody before ICE could assume custody.