What Japan’s Election Outcome Means for the US, East Asia 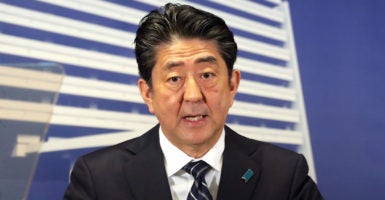 From a distant American viewpoint, the Japanese election on Sunday was much ado about nothing.

The country’s leader remained in place, the dominant party remained in control, and there will be no shifts in Japan’s policies.

The electorate chose continuation of the status quo rather than risk upsetting a positive economic growth trend or putting into place a new untested leader while the North Korean threat grows increasingly ominous.

This will all come as relief to supporters of Prime Minister Shinzo Abe, whose decision to call for a snap election initially seemed to be a poor one.

Abe had suffered declining public support earlier this year due to scandals relating to corruption and his push to revise the country’s constitution to allow a greater Japanese security role overseas.

Abe’s steadfast resolve in the face of North Korean belligerence and his advocacy for stronger measures against the regime’s escalating nuclear and missile capabilities earned him an uptick in public support.

Abe concluded that forcing an election would be less risky now than later, when public support might drop off again and opposition parties would have had more time to organize.

Heading into the election, Tokyo Gov. Yuriko Koike had announced the creation of a new party, which appeared to be a major challenge to the ruling party and to Abe himself. Koike was being talked about as a potential prime minister in the next election.

But Koike’s star quickly faded. She responded to the election results by announcing, “I would like to clearly say that this is a total defeat.”

Despite Abe’s impressive election victory, little is likely to change in Japanese foreign and security policies, for which the United States will be grateful. His long tenure in office provides a stability that is a welcome change from the revolving door of a series of previous prime ministers.

Abe has been a stalwart advocate for ramping up pressure on North Korea for its continued defiance of United Nations Security Council resolutions.

Japan is highly concerned by Pyongyang’s growing military capabilities and its repeated threats to use nuclear weapons if Tokyo were to assist the United States during a conflict on the Korean Peninsula.

As in the past, Japan was unnerved by the recent launch North Korean missiles over Japan, which again spurred decisions to augment missile defenses.

Abe has put in place numerous defense reforms, enabling Japan to play a larger role in addressing international security challenges. Most notable was his adopting a policy of collective self-defense to allow Japan to protect U.S. forces that are defending Japan.

Going forward, Abe will claim an election mandate to revise Japan’s post-World War II pacifist constitution, but he faces stiff political and public opposition in doing so. It is unclear whether Abe merely wants to codify the new status quo he created, or seek to further expand Japanese military roles overseas.

Regardless of his intentions, he is unlikely to gain much progress since a majority of the Japanese public is resistant to such changes.

Japan’s neighbors are also wary of any increase in Japan’s overseas security role, fearing a resurgence of the country’s militarist past. Such fears, however, reflect a misunderstanding of Japan’s post-war security posture.

North Korea’s growing security threat has driven Japan and South Korea closer together, allowing the two nations’ contentions past to recede as leaders rightly give first priority to the threat of the current millennium.

Abe has established a strong professional and personal relationship with President Donald Trump, perhaps more so than by any other world leader. Abe was able to overcome Trump’s longstanding criticism of Japan’s limited security role and trade practices, in part by proposing a bold bilateral economic initiative that emphasizes benefits for American jobs and exports.

The U.S. welcomes the continued leadership of a resolute Japanese leader who has been a close partner in increasing pressure on North Korea.

Abe’s re-election comes at a time of growing unease among U.S. allies in Asia. They are increasingly concerned that a pre-emptive U.S. attack on North Korea could embroil them in war, and that the U.S. may abandon them once Pyongyang is able to hit the U.S. with nuclear warheads.

During his upcoming Asia trip, the president should more clearly articulate his grand strategy for Asia and reassure Japan and South Korea of the United States’ commitment to defend them.