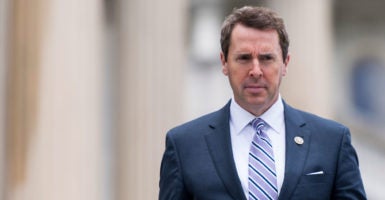 “Obamacare is in a ‘death spiral.’ Anything propping it up is only saving what Republicans promised to dismantle,” Rep. Mark Walker, R-N.C., says. (Photo: Bill Clark/CQ Roll Call/Newscom)

The latest attempt at a legislative fix to Obamacare was met with a mixture of hesitance and outright opposition by Republicans who have repeatedly vowed to pass a comprehensive repeal and replace bill.

A bipartisan bill, which was introduced Tuesday by Sens. Lamar Alexander, R-Tenn., and Patty Murray, D-Wash., would temporarily reinstate the federal payments to insurers that President Donald Trump cut off days ago and, in a nod to Republicans, would allow states limited flexibility in offering cheaper, less comprehensive plans.

The legislative fix was met with recrimination by top Republican lawmakers hours after its release. Rep. Mark Walker, R-N.C., who chairs the Republican Study Committee, publicly criticized the bill and said he could not support legislation that does not fully repeal Obamacare.

“Obamacare is in a ‘death spiral.’ Anything propping it up is only saving what Republicans promised to dismantle,” Walker tweeted. He elaborated further in a statement posted on Twitter, saying, “The GOP should focus on repealing & replacing Obamacare, not trying to save it. This bailout is unacceptable.”

Rep. Tom Cole, R-Okla., cast the bill as a costly continuation of Obamacare.

“None of our guys voted for Obamacare,” Cole told The Washington Post. “They’re not very interested in sustaining it.”

Senate Majority Leader Mitch McConnell, R-Ky., refused to commit one way or the other, telling reporters, “We haven’t had a chance to think about a way forward yet,” when asked about the viability of the bill Tuesday afternoon. House Speaker Paul Ryan, R-Wis., refused to comment.

After casting the bill as a short-term fix to stabilize the market Tuesday, Trump reversed course, tweeting Wednesday that he could not support a bill that reinstates cost-sharing reduction payments to insurers, which he recently discontinued.

I am supportive of Lamar as a person & also of the process, but I can never support bailing out ins co's who have made a fortune w/ O'Care.

Trump’s Wednesday tweet represents a significantly more definitive rebuke of the legislation relative to statements he made Tuesday night while addressing The Heritage Foundation.

“While I commend the bipartisan work done by Sens. Alexander and Murray,” Trump said during the Tuesday night speech, “I continue to believe Congress must find a solution to the Obamacare mess instead of providing bailouts to insurance companies.”

Earlier in the day, speaking at the White House, Trump described the bill as a “short-term deal” that would help “get us over this intermediate hump.”

A number of Republican senators insisted on waiting to give their opinion until more details have been released. Sen. John Kennedy, R-La., dismissed the idea that the bill represents a quick fix.

“Most of the members of the conference are finding out about the details for the first time. I don’t think anybody beyond Lamar and a few others know,” Kennedy told Politico. “The details are important.”