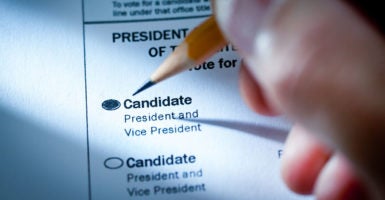 The Heritage Foundation added another round of cases this week to its ever-growing Voter Fraud Database.

Accounting for these new additions, the database now documents 1,088 proven instances of election fraud, including 949 cases that have resulted in criminal convictions, 48 that have ended in civil penalties, and 75 that have seen defendants enter diversion programs.

Americans should be alarmed, not only because Heritage has compiled so many examples of fraud—impacting nearly every state and elections for all levels of government—but because this figure is likely just the tip of the iceberg.

The Heritage database is not a comprehensive tally of election fraud. That figure would almost certainly be substantially larger.

Most states, after all, lack the robust procedures needed to detect fraud when it occurs. Even when fraud is detected, prosecutors often opt not to pursue cases because their priorities lie elsewhere.

Put simply, American elections are vulnerable and fraudsters know it. Not content to leave their ideological causes or their own careers up to the unpredictable will of voters, many fraudsters choose to act on this knowledge.

Here are two examples from the 2016 election, added in this week’s update:

Gladys Coego was a temporary worker in the Miami-Dade County Elections Department during the November election. She had been hired to open mail-in ballots, but she decided to go a step further: She deliberately altered these ballots to steer more votes toward Republican mayoral candidate Raquel Regalado.

Fortunately, Coego’s fraud did not alter the outcome of the election. She pleaded guilty to tampering with ballots and was sentenced to two years of house arrest.

Toni Lee Newbill, a resident of Colorado, cast two ballots in the name of her deceased father, one in the 2013 general election and another in the 2016 Republican primary. She pleaded guilty and was given 18 months of probation and ordered to complete 30 hours of community service, as well as pay a $500 fine.

Consider the consequences of the actions of these two individuals. Newbill used her late father’s name to double her influence as a voter, and in the process she canceled out the lawful vote of someone else. Coego took advantage of her position to literally replace the opinions of voters with her own.

Both Coego and Newbill effectively disenfranchised their fellow voters in pursuit of their own aims.

Now, these cases join more than 1,000 others in the Heritage database, which documents all manner of fraud from vote-buying conspiracies to corrupt politicians rigging elections, to illegal voting by aliens and felons.

These cases constitute incontrovertible evidence of election fraud—which is perhaps why the Heritage database has found itself in the crosshairs of the left. After years of insisting that fraud is a myth perpetrated by vote suppressors, inconvenient contrary evidence is the last thing some want to see.

Any reasonable and fair-minded reader would have difficulty concluding that its mischaracterizations and inaccuracies regarding the Heritage database were anything less than a deliberate attempt to mislead the public on the issue.

What is it that anti-election integrity activists fear?

Voter identification laws have been shown time and again not to suppress voter turnout. In fact, minority voter turnout has been shown to actually improve in many states after they adopt a voter ID law.

Claims that such laws discriminate and disenfranchise voters have been similarly debunked. Justice Department attorneys challenging voter ID laws in Texas and North Carolina could locate nobody who was unable to vote on account of these laws.

At the same time, evidence continues to mount that serious vulnerabilities in our election system are permitting noncitizens to illegally register and cast ballots in American elections. The Heritage database also documents many cases where convicted felons have illegally voted.

Asking for proof of identification at the ballot box—a precaution deemed necessary when buying alcohol or boarding an airplane—hardly seems inappropriate.

Nor does it seem outlandish for states to routinely inspect their voter rolls to detect and purge inaccurate and out-of-date registrations, a requirement under the National Voter Registration Act intended to cut down on the possibility that someone—like Newbill, for example—can vote in the name of deceased individuals, or vote twice in multiple states.

One recent report concluded with “high confidence” that 45,000 duplicate votes were cast in the 2016 election.

Somehow, innocuous measures like these seem to inflame liberal activists. In New Hampshire, for example, efforts to require voters to demonstrate they had established a domicile in the state when registering to vote prompted outrage. The New Hampshire Democratic Party accused supporters of instituting a “literacy test.”

At least one Democrat did endorse the measure, however: Secretary of State Bill Gardner, who noted that citizens deserve an electoral process they can trust. Kudos to him.

Gardner is exactly right. Election fraud is a serious issue that undermines public trust and confidence in the political process. In tight elections, even a small number of fraudulent ballots—sometimes even a single illegal vote—can swing the outcome and override the will of voters.

We, as a nation, should not willfully blind ourselves to this threat to the core of our democracy.

As The Heritage Foundation’s Voter Fraud Database proves, America has a problem, and it’s time to take the steps necessary to solve it.