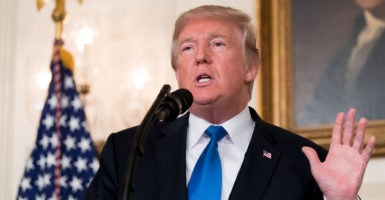 President Donald Trump and Republicans in Congress have made overhauling the tax code their focus for the remainder of 2017. (Photo: Xinhua/Sipa USA/Newscom)

President Donald Trump will speak Tuesday at an annual meeting of Heritage Foundation members in Washington. Trump is expected to promote his tax reform proposal, the top legislative priority for the White House.

Trump and Republicans in Congress have made overhauling the tax code their focus for the remainder of 2017. Since August, Trump has delivered a series of speeches across the country touting the benefits of tax relief for middle-class Americans.

Tuesday night’s address to a gathering of Heritage’s President’s Club will continue on that theme. It will be Trump’s first speech at an event held by The Heritage Foundation, which previously has hosted Presidents Ronald Reagan, George H.W. Bush, and George W. Bush.

“The timing of this year’s speech couldn’t be better,” said Ed Feulner, founder and president of the leading conservative think tank. “Congress has a once-in-a-generation opportunity to deliver sweeping, pro-growth tax reform for the American people. The president will address this critical issue, and we await his remarks with great anticipation.”

The speech will take place at 7:30 p.m. Tuesday. Live video will be available at The Daily Signal, the think tank’s multimedia news organization.

The tax reform proposal backed by Trump and congressional Republicans would:

As he did during speeches in Missouri, Indiana, Pennsylvania, and North Dakota, Trump is expected to use personal stories to illustrate how tax reform will lead to greater opportunity and prosperity for Americans.

The speech comes after a full week of major policy announcements from the White House on issues such as immigration, Obamacare, and the Iran nuclear agreement.