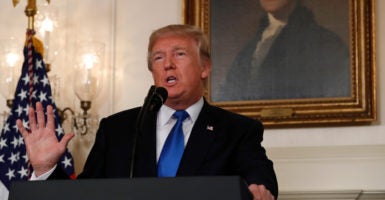 President Donald Trump isn’t exiting the Iran nuclear agreement entirely, but he does want to enlist allies to put more teeth in it and push Congress to take stronger actions to hold the Islamist dictatorship accountable.

In a speech from the White House, Trump denounced the deal entered under President Barack Obama, but said, “What’s done is done and we are where we are.”

The administration is taking a tougher and more inclusive strategy against Iran that includes rallying allies to bring sanctions against Iran’s chief military force and encouraging Congress to codify standards that will outlast the existing deal.

He called for making enforcement tougher by the international community. The White House said the deal must be strictly enforced to allow greater access to Iranian sites for the International Atomic Energy Agency, the nuclear inspections arm of the United Nations.

“In the event we are not able to reach a solution working with Congress and our allies, the agreement will be terminated,” Trump said. “It is under continuous review and our participation can be canceled by me as president at any time.”

Dealing with Iran’s nuclear ambitions is just one aspect of the broader United State’s policy toward Iran, said Secretary of State Rex Tillerson, adding that the administration is also addressing the country’s material and financial support of terrorism, the ballistic missile program, hostility toward Israel, and efforts to destabilize the Middle East.

The 2015 multilateral deal led by the Obama administration, known as the Joint Comprehensive Plan of Action, or JCPOA, deals exclusively with Iran on nuclear.

“We will stay in the JCPOA,” Tillerson told reporters Thursday evening in an embargoed press conference.

However, the president will decertify the deal under the Iran Nuclear Agreement Review Act, or INRA, by asserting it is not in America’s best interest, and then ask Congress to take tougher measures against Iran.

Tillerson said Congress has three options. One would be to do nothing. The other would be to reimpose sanctions on Iran, which would throw the agreement into question. Trump is recommending a third option, requiring Congress to more narrowly define expectations from Iran.

“The president will recommend amending [the Iran Nuclear Agreement Review Act] to put in place firm flashpoints at which sanctions would automatically go back into place,” Tillerson said. He later added, “This is the best possible path to fixing the deal.”

Moreover, the sunset clauses in the Iran deal would no longer pose the same danger once Congress affirms stronger standards Iran must meet. Tillerson said he has discussed this with members of Congress as well as allies.

The U.S. entered the agreement with Great Britain, France, Germany, Russia, and China. Tillerson said that European allies “are demanding access to sites” that they previously haven’t. Iran has restricted inspection to military sites from the International Atomic Energy Agency.

Previous speculation was that the Trump administration would decertify the Iran deal, which would leave it up to Congress to sort out. Another thought was that Trump would seek to renegotiate the deal. Tillerson said it’s unlikely Iran would do so.

Trump has been critical of Sen. Bob Corker, R-Tenn., for the INRA legislation. Tillerson, however, said Corker is very open. Further, regarding Democrats he talked about the matter to, Tillerson said, “the minority party has not outright rejected this.”

The best route would be to try to salvage what was a flawed deal, David Albright, president of the Institute for Science and International Security, said during a Heritage Foundation forum Thursday before Tillerson spoke to the press.

“In the fixer community, there is a recognition that the sunsets are a big problem,” Albright said. “I’m in the camp that says we should try to fix them now and try to create a U.S. policy that in a sense rewrites these deals to say we will not accept these sunsets.”

Albright explained the first sunset would come in three years, which would lift restrictions on the transfer of conventional or heavy armed missiles to or from Iran. In five years, the ban on ballistic missile development ends. By eight years, Iran could be allowed under the agreement to scale up its manufacturing of centrifuges.

“Then at the 10-year point you have a situation where Iran is scaling up its nuclear weapons capabilities essentially. By that time, it would be armed conventionally to a tee,” Albright said. “It would be much more developed economically and it would be developing intermediate-range and intercontinental ballistic missiles. If you wait until the 8- to 10-year timeline, it’s not clear what the U.S. could do. Iran would be a major regional power.”

If the deal could be strengthened, it would be great, said Nile Gardiner, director of the Margaret Thatcher Center for Freedom at The Heritage Foundation. But he doubts it.

“I don’t realistically see the prospect of that happening, actually. Not the least because Iran has no interest in renegotiation. China and Russia would be utterly opposed,” he said during The Heritage Foundation panel Thursday. “The Europeans, who don’t want to be seen as weak on this, and there will be no appetite in European capitals for renegotiation. So, while the renegotiation and strategy will buy some time on this, I don’t think we are actually going to see a real renegotiation conducted.”

Iran could become a regional nuclear power in 15-20 years under the, and its government is thinking long term.

“If they can wait out the West, while fundamentally rebuilding their military power, rebuilding their ballistic missile ability, becoming a far richer, wealthier company with all the sanctions gone, this is great for Iran,” Gardiner said. “I don’t see how on earth this deal is good for the United States or the free world in the long term. This is a temporary agreement and a dangerous, short-sighted deal that will at the end of the day allow Iran to become exactly what it wants to be, a regional superpower.”

The administration will also be working with allies to confront actions of the Islamic Revolutionary Guard Corps, including its abuse of human rights and financially extorting the resources that could be used to build up the economy.