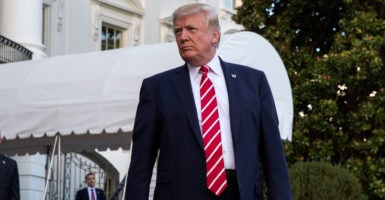 “To summarize, our plan goes from eight tax brackets down to four, expands the zero tax bracket greatly, expands the child tax credit, repeals the estate tax and special interest tax breaks, cuts the corporate tax rate … and brings it all the way down to 20 percent, and cuts tax rates for small businesses to the lowest level in more than 80 years,” the president said.

Some supporters shouted, “USA, USA,” during the remarks. When Trump talked about “this huge tax cut,” the crowd shouted back, “Yuuuge!”

Trump talked again about how the plan cuts the corporate rate from 35 percent to 20 percent, makes the first $12,000 for individuals, makes the first $24,000 for married couples income tax free, increases child and elder care tax credits, and would allow people to file taxes on one sheet of paper. But he also tried to sell the reform on how it would benefit people’s wallets.

Here are some key takeaways from the speech.

Trump boosted increasing tax credits for those caring for an elderly adult and for increasing the child tax credit. He introduced audience members who were small business owners to reinforce that this was not a tax cut for the rich.

“By eliminating tax breaks for special interest, loopholes that primarily benefit the wealthy, our framework ensures that the benefits of tax reform go to the middle class, not to the highest earners, it’s a middle-class bill,” Trump said.

Trump said his wealthy friends urged him to make the tax cut for the middle class. One of those, Trump said, was New England Patriots owner, and Trump supporter, Bob Kraft.

“Bob Kraft, he owns the New England Patriots, does very well, good guy,” Trump said, drawing cheers. “He does a great job. He was at the White House recently. He gave me a Super Bowl ring. I was very honored. As he’s leaving the White House, he says, ‘Donald, I know you’re very soon going to be doing tax reform and tax cuts. Give it to the middle class. Don’t give it to us.’ And that is what we are trying so hard to do.”

The comment comes as Trump has been in a war of words with some National Football League players that have refused to stand for the national anthem.

“My Council of Economic Advisers estimates that this change, along with a lower tax rate, would likely give the typical American household a $4,000 pay raise,” Trump said. “It could be a lot more than that too, you haven’t heard this, so about a $4,000 amount of money additional for the American family to spend. That’s very exciting. And you’re going to spend that money, it’s going to be put to work and jobs are going to be produced and we are going to start making our product again.”

In addition, Trump touted the direct benefit for small businesses.

“The more than 30 million Americans who have small businesses will see, listen to this, a 40 percent cut in their marginal tax rate, 40 percent,” the president said. “I wouldn’t want to be a politician against that. They’re going to have a long, hard winter.”

Trump said Democrats critical of the plan aren’t being honest. Trump stressed that counting those who pay zero in federal income taxes, there are eight brackets.

“They’re not telling you the truth because they pretend there isn’t a zero rate, and it’s expanding very substantially under my plan,” Trump said. “They don’t show the zero rate. … We’re bringing it down, remember, from eight brackets to four, but they’re forgetting to use the zero bracket, which truly is deceptive.

“So the rates are coming down zero, 12 percent, 25 percent, and 35 percent, all big beneficiaries from what there is like you haven’t seen before,” Trump continued.

Shortly after the speech, the White House issued a summary of the plan that said it will “consolidate the seven existing income tax brackets for taxable income to only three brackets: 12 percent, 25 percent, and 35 percent.”

Amid talks about the Iran nuclear deal and how to handle North Korea, Trump only dropped hints about a country that is changing its attitude toward the United States.

“America is being respected again,” Trump told the audience. “Something happened today where a country that totally disrespected us called with some very, very important news.”

“One of my generals came in, they said, ‘You know, I have to tell you, a year ago they would have never done that,’” the president continued. “It was a great sign of respect. You’ll probably be hearing about it over the next few days. But this was a country that did not respect us. This is a country that respects us now. The world is starting to respect us again.”

During the remarks, Trump noted he has a forthcoming announcement on the Iran nuclear deal.

He also said he is in the midst of renegotiating the North American Free Trade Agreement.