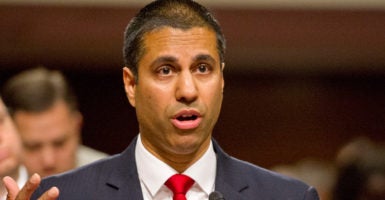 Ajit Pai, the chairman of the Federal Communications Commission, is facing stiff opposition from Democrats, thanks to his position on net neutrality.

The Senate is expected to vote on his reconfirmation Monday. On Thursday, the Senate advanced, in a 55-41 vote, Pai’s nomination.

Pai was appointed to the FCC by President Barack Obama in 2012, and was confirmed unanimously by the Senate in May of that year. He was appointed commission chairman by President Donald Trump in January, and Trump renominated him in March to serve a second five-year term.

In his biographical profile on the FCC’s website, Pai says a free-market system delivers “more value” to American consumers than a heavily regulated one.

“Consumers benefit most from competition, not pre-emptive regulation,” he wrote.

Pai proposed in April a plan to reverse the net neutrality rules imposed by an FCC dominated by Democrats in 2015.

“Net neutrality essentially is the concept of how we want the internet to be governed,” Pai told The Daily Signal’s Genevieve Wood in an interview in May. He added:

Historically, it’s been governed by technologists and engineers and business people in the private sector. That was the Clinton-era light touch approach that started in 1996, and that was what governed us until 2015. At that point, on a party-line vote, the FCC decided you know what, instead of those folks governing the internet, we want government lawyers and bureaucrats to determine how the internet is regulated.

And the simple point I’ve made is President [Bill] Clinton got it right … that light touch approach delivered a lot of value in terms of the digital economy and that’s what we’re looking to return to.

“Since taking over the FCC leadership in January, Chairman Pai has wasted no time in moving the agency away from its key mission to promote the use and deployment of communications in the public interest,” Cantwell said. “I’m not going to vote for someone who is going to slow down and clog the internet.”

“This debate on net neutrality, on privacy, is at a defining historical moment, and we have to ensure there is a full public debate so everyone can understand its importance,” Markey said.

Net neutrality advocacy groups such as Free Press also called for Pai’s ouster. The organization created a petition calling on the Senate to “fire” Pai from the FCC. The advocacy group claims its petition garnered 10,000 signatures on its first day alone.

“While he’s supposed to protect the public interest,” Free Press writes, “he’s continuously voted against it and sided with the deep-pocketed corporations.”

Other complaints Democrats have lodged against Pai and the current FCC include the purported “delay” in addressing recovery from the hurricane disasters in Texas, Florida, and Puerto Rico, and Pai’s proposal to determine home internet access by looking at cellular internet. Currently, the FCC determines if citizens have quick access to broadband by checking if people have home internet and mobile service.

But amid the demands for removal, Sen. John Thune, R-S.D., defended Pai Thursday.

“It is my belief,” said Thune, “that Mr. Pai’s stellar career and communications policy, his integrity, and his tireless work ethic all serve him well as he continues to serve the FCC and guide the agency back to being a more collaborative and productive institution.”