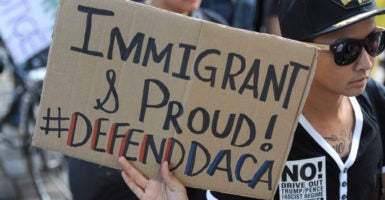 Rep. Mo Brooks said a 1986 law “encouraged more foreigners to violate our laws, based on the belief that we would not enforce” the southern border. (Photo: Sam Simmonds/Polaris/Newscom)

Members of the House Freedom Caucus are staking out a tough stand on immigration reform, including any effort to codify the now-suspended Deferred Action for Childhood Arrivals program into law.

“It is unlikely that I will vote for any kind of DACA, absent a global fix for the border security problem,” Rep. Mo Brooks, R-Ala., said.

At a Conversations with Conservatives event that took place Sept. 26 on Capitol Hill, Brooks was adamant that Congress not make the same mistake it made more than 30 years ago.

The Alabama lawmaker said he wants jobs to go to Americans, rather than illegal immigrants.

Rep. Tom Garrett, R-Va., agreed with Brooks, also citing the 1986 legislation, characterizing it as a mistake.

Garrett said the border needs to be secured first, before any other immigration issue is dealt with.

Another Republican congressman from Virginia, Rep. Dave Brat, raised the issue of chain migration. The number of recipients of former President Barack Obama’s DACA executive amnesty is estimated at between 700,000 to 800,000, and Brat said if the codification legislation included their extended families, it could raise that number to 4 million.

On Sept. 5, President Donald Trump discontinued DACA, which was imposed by his predecessor, but gave Congress six months to come up with legislation to codify it if it wished to do so.

I look forward to working w/ D’s + R’s in Congress to address immigration reform in a way that puts hardworking citizens of our country 1st.

Congress now has 6 months to legalize DACA (something the Obama Administration was unable to do). If they can’t, I will revisit this issue!

“I’m from the state of Arizona, where I’ve got members of my own [congressional] delegation that don’t believe in the sovereignty of the United States,” Gosar said.

He said Republican members of Congress should fight for what they campaigned on: “Build the wall, secure that border, internal enforcement, and then eliminate the incentives people have to enter this country illegally.”