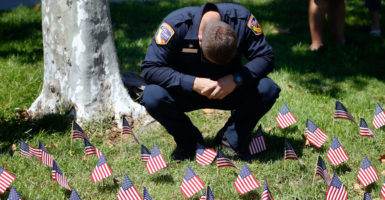 Freedom of religion isn’t as protected as some Americans may think. In fact, reported attacks on religion are increasing in the U.S. and, according to First Liberty Institute, the evidence is undeniable. “We’re in a battle right now for religious freedom in the future of our country,” First Liberty President Kelly Shackelford said in a Facebook Live video Sept. 12.

Justin Butterfield, editor-in-chief of the study, said in an interview with The Daily Signal that much of the data comes from court filings from across the country.

The research team also collects reports from news outlets and other organizations, including the Freedom From Religion Foundation, an atheist group.

Butterfield, who has a law degree from Harvard, said researchers specifically looked for instances where someone was illegally restricted from, or prosecuted for, practicing his or her faith.

“Undeniable” divides cases into four categories: attacks on religion in public areas and the workplace; in schools; in churches and ministries; and in the military.

First Liberty, a nonprofit legal organization established in 1997, focuses on defending religious freedom in court cases. It has participated and provided information in court cases at all levels, including the Supreme Court. It also publishes reports educating Americans about the relevance of the First Amendment.

First Liberty began research in 2004, when Shackelford and others testified during a Senate hearing on discrimination and intolerance based on religion. Two senators, the late Democrat Edward Kennedy of Massachusetts and John Cornyn of Texas, got in touch with Shackelford, wanting to know how prevalent the issue was.

Butterfield said Kennedy and Cornyn asked First Liberty to collect more reports of attacks on religion. The organization  first published “Undeniable” in 2012, and has published a new edition every year since.

One court case in 2012 that he found particularly appalling, Butterfield recalled, was Hosanna-Tabor Evangelical Lutheran Church & School v. EEOC. In it, a teacher fired by a Lutheran school sued under the Americans With Disabilities Act, even though churches have the freedom to choose leaders.

When asked why he thought more cases of religious intolerance were emerging, Butterfield said that now more than ever in America, the “concept of religious freedom is unpopular.” Some Americans, he said, are “increasingly hostile to religious beliefs that differ from their own.”

But what separates the U.S. from other countries, he said, is Americans’ persistence in fighting for their faith.

“When people stand up for their religious liberties, they win,” Butterfield said.