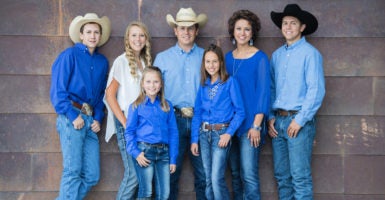 What lawmakers do in Washington to overhaul the tax code is a “big deal” for a fourth-generation cattle rancher in North Dakota, she says.

“Tax reform is a big deal for families like mine and others across North Dakota and across the United States,” Julie Ellingson told The Daily Signal in a phone interview.

“Farmers and ranchers are small business people, and so the importance of being able to pass on a family business to the next generation is intrinsic to our businesses [and] our goals,” said Ellingson, 43, who co-owns Ellingson Angus, with her husband Chad.

Founded in 1995 near the town of St. Anthony in the south central part of North Dakota, Ellingson Angus breeds bulls, heifers, and cows to sell to other ranchers.

Ellingson says action by Congress and President Donald Trump on tax reform, and specifically eliminating the death tax, is essential for her to be able to pass on the family business to her children.

“The estate tax, or the death tax as it is probably more appropriately called, along with capital gains taxes certainly impairs the ability of many families in creating the opportunity for the family business to continue, without some very significant burdens,” Ellingson said.

The estate tax is a tax on a person’s lifetime accumulated property, Heritage Foundation scholars Rachel Greszler, John Ligon, and Patrick Tyrrell wrote in a 2014 report, while the capital gains tax is applied when an asset is sold for more than its original purchase price.

Ellingson, who also is vice president of the North Dakota Stockmen’s Association, an 88-year-old cattle trade organization, said some families have to sell parts of their livelihood in order to meet tax obligations.

“In some cases, families are required to sell off significant portions of their operation just to cover their tax liability,” Ellingson said, “And so the elimination of the death tax, a full and permanent repeal, has long been a priority of Stockmen’s Association here in North Dakota.”

The cattle rancher said she also wants to see the preservation of stepped-up basis.

This provision “allows inheritors to revise upward the basis on which they pay capital gains taxes on future increases [in capital gains],” said Adam Michel, a tax policy analyst at The Heritage Foundation. “The value of the inheritance is reset at the current market price, as opposed to carrying over the price paid by the deceased owner.”

Ellingson said it is important for her to be able to pass the family business to her children.

“My great-grandparents are those that homesteaded here from Russia; they were Germans from Russia, so very similar to many of the [other] farm and ranch families in North Dakota,” Ellingson said, adding:

So they came to our home area, and it was my grandfather and grandmother that started the registered cattle business. This has been very much a part of our family for many generations.

Ellingson lives in the house and on the ranch where she was raised by her parents, as was her father, “so certainly our family business has been a legacy,” Ellingson said.

That legacy is threatened, according to Ellingson, if comprehensive tax reform does not address the death tax:

Families that are faced with significant estate tax burdens, they need to come up with the cash in order to cover the tax liability. And so where do you come up with the most dollars? Again, cattle ranching and much of agriculture really isn’t … a cash-based kind of business.

Your land and your cattle, your equipment, are all critical components to your business. But that’s where you come up with cash, so some families are forced to sell key components … in order to cover pretty extreme tax liability, if they are saddled with that in their situations.

The former Julie Schaff married Chad Ellingson, her high school sweetheart, in 1995, and the two merged their cattle herds to establish Ellingson Angus. They eventually bought the ranch, including some land and facilities, from her parents. The couple had met six years earlier at the state Future Farmers of America convention.

“We share a passion for agriculture and this way of life,” she said.

“Our story isn’t unique,” Ellingson said. “The death tax [repeal] and comprehensive tax reform is important for agriculture across the board, so it is important that it is done right—and certainly the death tax elimination is a big piece of the puzzle.”

Michel agrees that the death tax is detrimental, especially for small business.

“One of the worst features of the death tax is how it hurts family-owned businesses,” Michel said, adding:

Many estates subject to the death tax are small or family businesses that are asset rich but cash poor. Their wealth is not in cash, but is instead in physical form, things like buildings, land, and machinery. When the owner of a business dies and the heirs are slapped with a 40 percent tax on the value of the business, they often have to sell off assets, or even the entire business, to pay Washington. This hurts small and family-owned businesses as well as local workers who work for these businesses.

The implications of tax reform reach far beyond her own family, Ellingson said.

“That’s not only important to the families who are living there and working in those industries, but for the broader U.S. economy and obviously for the source of food for the United States and beyond. So that stability is a pretty big deal for all Americans.”