I’m a Descendant of Holocaust Survivors. Why I’m Appalled at the Comparison of Christian Bakers to Nazis. 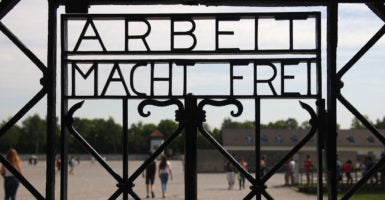 A sign above the entrance of the former Dachau concentration camp reads in German, "Work makes you free." (Photo: Michael Dalder/Reuters/Newscom)

Jackson Richman is the Capital Commentary editor for Kol HaBirah, a Jewish newspaper in the greater Washington, D.C. area.

It’s November 1938, and the Nazis have confiscated a silk factory owned by the same Jewish family for over a decade, arresting the owner.

Fast forward to 2014, and a state official has compared a Colorado Christian baker to the same group that took away what belonged to the Jewish silk factory owner—the father of my grandmother’s cousin, Godofredo.

This in a country founded by people who fled religious persecution.

While America, the country that mostly turned away Jews fleeing Adolf Hitler, is thankfully not on a course to repeat the Holocaust’s atrocities, some of its citizens have taken to comparing matters of individual freedom—such as a baker refusing to make a same-sex wedding cake—to the actions that led to the deaths of 11 million people, including 6 million Jews and 1.5 million children.

Colorado Civil Rights Commissioner Diann Rice said, “Freedom of religion and religion has been used to justify all kinds of discrimination throughout history, whether it be slavery, whether it be the Holocaust.”

Especially as the grandson of Holocaust survivors, my message for Rice and for those who make religious liberty comparisons to the Shoah is simple: Stop it.

The late Nobel laureate Elie Wiesel, who survived the Holocaust, warned against comparisons like this. He said:

Apply that logic to the case of Colorado baker Jack Phillips: Only Auschwitz was Auschwitz.

To cheapen the Holocaust by making such comparisons is to convolute and deny its atrocities.

The Holocaust, which only started with the discriminatory Nuremberg Laws only to end up in genocide, didn’t happen so much because of a hatred of a religion, but rather an explicit hatred for a people. This hatred extended to people who helped those the Nazis targeted, like the family who hid my only living grandmother when she was a child in France.

In fact, once Hitler took power, he sought to reduce Christianity’s influence on German society.

Rice’s comment was nothing but perverted and bigoted. I dare her to tell my living grandmother that what the Colorado baker did compares to the atrocities at Dachau, of which her late husband survived (his father perished there), and about which Phillips’ father wrote notes regarding the atrocities there and other places like Buchenwald, which he helped liberate.

Hypocritically, those on the left, like Rice, cite the plight of Jewish refugees during World War II as a reason for why the U.S. should take in refugees from war-torn places like Syria. Apparently they failed to learn about the Holocaust, which consisted of Jewish bakeries and other businesses being looted on Kristallnacht, or “Night of the Broken Glass,” let alone being sent to concentration camps.

(Important side note: Where is the outrage from the left over the atrocities in Rohingya, Darfur, Tibet, in Iraq against the Yazidis, and other persecuted groups in the Middle East? Those conflicts are severe compared to a bakery refusing to bake a same-sex wedding cake.)

The famous psychologist Rollo May said, “The opposite of courage in our society isn’t cowardice. It’s conformity.”

It’s astonishing that America, which eventually admitted my surviving grandparents, is in 2017 a place where some are trying to coerce others to conform to an ideology, even if it conflicts with their personal beliefs.

In Nazi Germany, if you weren’t an Aryan as Hitler prescribed in “Mein Kampf,” you would perish. Is it somehow acceptable to compare this baker or anyone coerced by those with differing ideologies to the Nazis?

If we’re going to say “Never again,” let’s also say “No more.” No more false equivalences. No more hate. Conversing, not ostracizing, is the solution to bridge divisions between people.

Let’s judge people personally—not by their background, but rather by their character.