Conservatives Balk at Talk of Trump Amnesty Deal With Democrats 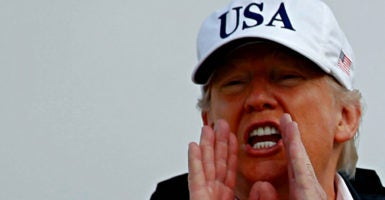 President Donald Trump amplifies his point to reporters Thursday while taking questions as he boards Air Force One at Joint Base Andrews to view Hurricane Irma response efforts in Florida. (Photo: Jonathan Ernst/Reuters/Newscom)

President Donald Trump and Democratic leaders asserted that they haven’t reached a deal to give legal status to those who came to the country illegally as children—but one seems to be pending.

“It’s a negotiating trick, and one that Mr. Art of the Deal has fallen for,” @MarkSKrikorian says.

Some immigration hawks are baffled by the promise of more border security and enforcement in exchange for Trump’s backing of legislation to codify DACA, the acronym for President Barack Obama’s executive action allowing 800,000 such illegal immigrants—some call them “Dreamers”—to stay and work in America.

The promise of border security in the future for amnesty now sounds “suspiciously like” the 2013 Gang of Eight bill that eventually collapsed in the Senate, said Mark Krikorian, executive director of the Center for Immigration Studies, which advocates tougher enforcement of immigration law.

“What does massive border security mean?” Krikorian said in a phone interview with The Daily Signal. “It’s a negotiating trick, and one that Mr. Art of the Deal has fallen for.”

“The president walked right into Chuck Schumer’s car lot and was told there is no way home without buying a car. He has fallen for a tired, pro-amnesty talking point,” Krikorian said.

The top Democrats also said they agreed to “work out a package of border security, excluding the wall.”

Last week, Attorney General Jeff Sessions announced the Trump administration would rescind the executive action creating DACA, but wind it down in an orderly fashion over six months, to give Congress time to act on putting all or some of its components into law.

Krikorian said Trump might be a pro at real estate negotiations, but “mobbed-up developers and crooked unions are more reliable than Chuck Schumer.”

Rep. Dave Brat, R-Va., whose surprise 2014 upset of a powerful House incumbent resulted in part from his opposition to amnesty for illegal immigrants, was cautious.

“I don’t think we know anything yet. Everybody needs to cool down,” Brat told The Daily Signal in a phone interview. “Whatever agreement they reach still needs to get through the House and Senate. … I don’t think the president will ignore the forgotten man, the American worker, as more details emerge.”

“No way,” Brat said when asked if a bill giving legal status to those brought here illegally as children could pass without funding for a border wall.

“I don’t think DACA is passable with a wall,” Brat said of such an amnesty. “We would also need to require E-Verify and end chain migration.”

E-Verify is a system through which employers may confirm whether a job applicant is in the country legally. Chain migration refers to basing legal entry into the country on family reunification, rather than on a merit-based system to fill certain jobs.

Rep. Paul Gosar, R-Ariz., said he also wants to know more, and that the border should be secured without granting amnesty.

“In my opinion, there is very little room for negotiation in the conversation of securing our borders,” Gosar said in a prepared statement to The Daily Signal. “The DACA program needs to go and we must ensure the security of our borders by building a wall. Period.”

After meeting with Trump at the White House for dinner Wednesday night, Schumer and Pelosi issued a joint statement that said:

We agreed to enshrine the protections of DACA into law quickly, and to work out a package of border security, excluding the wall, that’s acceptable to both sides.

Speaking to reporters Thursday, Trump repeated his denial of a deal in which he would sign a bill advanced by Democrats.

“We’re talking about taking care of people, people that were brought here, people that have done a good job and were not brought here of their own volition,” Trump said. “But very importantly, what we want—we have to have a wall.”

Earlier in the day, Trump had said “the wall will come later,” but he explained during the press gaggle on Air Force One, returning to Washington from Naples, Florida, that Democrats can’t obstruct construction of a barrier going forward.

“We have to have an understanding that whether it’s in the budget or some other vehicle in a fairly short period of time, the wall will be funded,” the president said. “Otherwise, we’re not doing anything.”

On CNBC, Mick Mulvaney, director of the White House Office of Management and Budget, talked about what he saw in Trump’s meeting with Pelosi and Schumer.

“And the Democrats said, ‘Well, let’s talk about border security,’” Mulvaney said. “The reason that we can say here today that we don’t have a deal is that the president is pushing the wall. Is it possible to get a deal without the wall now and perhaps getting the wall later … that’s the basis for conversation.”

Both top Democrats back a bill with the sole purpose of granting legal status to those covered by DACA. Pelosi tweeted Thursday that such a bill has the votes to pass if it came to the House floor.

I have no doubt that if the #DREAMAct were to be given the vote it deserves, it would pass. #ProtectDREAMers

Schumer tweeted about the topic Wednesday, ahead of the dinner meeting with Trump:

800,000 Dreamers anxiously await action by this Congress. There is no reason to wait. #ProtectDREAMers pic.twitter.com/1uZLUNtl3o

The promise of stronger border security in exchange for codifying DACA is familiar from past immigration reform proposals, said David Inserra, a policy analyst on homeland security with The Heritage Foundation.

“This is the same concept as we’ve seen before, with amnesty now and in theory in the future have stronger border security,” Inserra told The Daily Signal. “If that’s the case, we’ve seen this movie before. But we don’t know what the deal will be yet.”

In 2013, four Republican senators and four Democratic senators, dubbed the Gang of Eight, co-sponsored what they called a comprehensive immigration reform bill to grant legal status to the estimated 11 million illegal immigrants, while increasing border security.

The bill died, in large part because conservatives opposed blanket amnesty and were not convinced that actual security and enforcement would occur.

“Administration officials don’t want to be caught flat-footed with no proposals,” Meadows said, according to Roll Call. “On the debt ceiling there were no conservative solutions. … And it’s incumbent upon us to put some conservative and compassionate solutions out there to address it. So we’re taking that task as a real challenge. I was asked to do it. That’s what we’re doing.”

“I know there’s a lot of discussion, a lot of calls today about, ‘Oh, gee, the president’s talking about DACA this and DACA that,’” Gohmert said. “I have spent so many hours, so many nights down on the border, all night long, and I always heard the same thing from my friends in the Border Patrol.”

“Every time anybody in Congress or in the administration starts talking about, ‘Well, we’re working out a deal for amnesty for this or to legalize that,’ then we get a huge surge in people coming across our southern border.”

Many critics blamed DACA for giving the impression that America was open to young illegal immigrants, prompting the surge of youth apprehended at the border in 2015.

The White House had noted a decrease in apprehensions at the southwest border since Trump took office Jan. 20. Arrests in the interior by Immigration and Customs Enforcement agents have increased by 43 percent under Trump.

Gohmert said it’s best not to talk about amnesty.

“There are always some that get drawn into sex slavery and mules and drug dealers for the drug cartels, and we have seen the video and seen the evidence: They die trying to get in. We should not be luring people in. We need to secure the border, [and] that includes building a wall,” Gohmert said.

The wall must be built before any new immigration reforms are enacted, Rep. Andy Biggs, R-Ariz., said.

“The American people are tired of broken immigration promises. Before any reform occurs to our immigration system, the wall must be built to keep our promise, restore trust, and secure our borders. Nothing short of a physical wall will suffice,” Biggs said in a prepared statement, adding:

I also disagree that the focus of our efforts should be on creating yet another amnesty program. It would be a mistake to repeat the past, with mere promises of actions to be taken in the future. Instead, Congress should prioritize full enforcement of our immigration laws, eliminating incentives that drive illegal immigration, and fully funding a physical border wall.

However, to make the wall or any other positive reforms a reality, the Senate must eliminate its 60-vote filibuster rule. We will not be able to uphold our promises, such as the wall, Obamacare repeal, and tax reform, without repealing this rule, and I implore Senate leaders to do what is right for the country. We should not preserve an extraneous Senate tradition in place of important, positive legislative policy that benefits Americans.