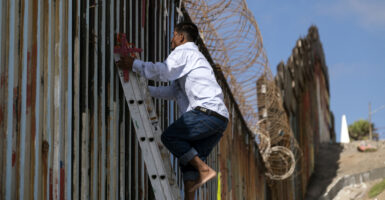 More deaths have occurred along the U.S.-Mexico border in the first half of 2022 than in the entire calendar years of 2020, 2018, and 2017, according to a U.N. agency. Pictured: Josue Serrano, a deported migrant from Mexico, hangs wooden crosses July 4 on the border fence at Playas de Tijuana in honor of those who died while migrating to the U.S. (Photo: Guillermo Arias/AFP/Getty Images)

Under the Biden administration, deaths of migrants along the U.S.-Mexico border in 2021 increased by almost 300 from the prior year, and by 200 from the last non-pandemic year, according to a United Nations agency that now classifies the southern border as the “deadliest land crossing in the world.”

Moreover, more border deaths have occurred in the first half of 2022 than for the entire calendar years of 2020, 2018, and 2017, according to data from the International Organization for Migration’s Missing Migrants Project.

Mexican President Andrés Manuel López Obrador visited the White House on Tuesday for a meeting with President Joe Biden. Their meeting occurred less than a month after 48 migrants  were found dead in or near an abandoned tractor-trailer in San Antonio, Texas, and five of 16 others hospitalized later died.

From January to December 2021, a total of 1,238 lost their lives while migrating in North America and South America, more than half of them on the U.S.-Mexico border, according to data released this month by the International Organization for Migration’s Missing Migrants Project.

“At least 728 of these deaths occurred on the United States-Mexico border crossing, making this the deadliest land crossing in the world, according to the data,” the report from the U.N. agency says.

So far in 2022, a total of 493 deaths have occurred along the U.S.-Mexico border, Jorge Galindo, communications officer for the International Organization for Migration, told The Daily Signal in an email.

During President Barack Obama’s final year in office, 412 deaths occurred along the border.

At least 51 of the 1,238 who died last year while migrating in the Americas were children, according to the International Organization for Migration.

Border deaths in 2021 jumped 53% from the prior year, according to the organization.

“The number of deaths on the United States-Mexico border last year is significantly higher than in any year prior, even before COVID-19,” Edwin Viales, author of IOM’s report on migrants in the Americas in 2021, said in a public statement. “Yet, this number remains an undercount due to the diverse challenges for data collection.”

Upon entering office in January 2021, Biden reversed most of the Trump administration’s border policies, doing away with the “Remain in Mexico” policy for asylum-seekers, halting construction of the border wall, and returning to catch-and-release policies.

The International Organization for Migration released its data shortly after illegal migrants were found dead or dying June 27 in or around the tractor-trailer on a roadside in San Antonio.

The dead include citizens of  Mexico, Guatemala, and Honduras in what homeland security officials believe was a human smuggling operation.

The Department of Homeland Security did not respond to inquiries from The Daily Signal about the growing number of migrant deaths along the border.

“Now we have record deaths, and you almost never hear a word about it from most news outlets,” Homan, now a visiting fellow on border security issues at The Heritage Foundation, parent organization of The Daily Signal, wrote in a Fox News op-ed, adding:

And meanwhile, migrants continue to entrust themselves to the bloodthirsty animals who run the cartels, who have made record profits on smuggling people and drugs since Biden took office. … For months, the Biden administration has lied to the American people about creating a ‘moral and humane’ immigration system. How is any of this humane? How is any of this moral?

The International Organization for Migration, part of the United Nations, was established in 1951 to promote what it calls humane immigration policies. It counts 174 member states and a presence in over 100 nations, including countries in Central America, North America, and the Caribbean.