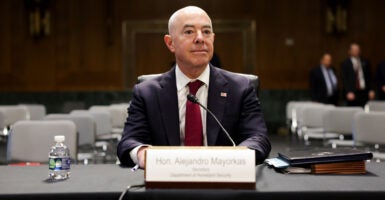 Secretary of Homeland Security Alejandro Mayorkas—seen here testifying before the Senate Appropriations subcommittee on homeland security on May 4—has told Immigration and Customs Enforcement “that unlawful presence is not grounds for removal” once the illegal aliens are here. (Photo: Kevin Dietsch/Getty Images)

President Joe Biden has been functionally abolishing Immigration and Customs Enforcement from his first day in office.

A year and a half into his presidential term, Biden’s administration is getting bolder and more strategic, gutting ICE resources and funding, doing everything it can to stop immigration enforcement, and directing ICE lawyers to close tens of thousands of illegal aliens’ cases.

Biden and Department of Homeland Security Secretary Alejandro Mayorkas continue to welcome record numbers of illegal immigrants at the border every day and refuse to protect the homeland (causing states such as Texas to take unprecedented measures to protect their residents).

Then, they take it a step further by refusing to detain or deport illegal immigrants once they are here. (Mayorkas has told ICE “that unlawful presence is not grounds for removal.”)

They have no problem stating their intentions:

From Day One, Biden got to work demoralizing the ICE workforce. The Washington Post reported in May of 2021:

‘It’s a weird, frustrating time,’ said one ICE official, who is not authorized to speak to reporters, describing a climate of distrust. ‘It feels like the administration doesn’t have our backs.’

Just as quickly, the administration largely defunded ICE, making it next to impossible for the agency to do its job.

And despite a federal court last month vacating Biden and Mayorkas’ latest attempt to radically limit lawful immigration enforcement, it’s hard to believe the administration will comply and not push back. It has a well-documented track record of ignoring court orders and acting as though it’s above the law.

To make matters worse, Biden’s DHS is on track to let 1 million deportable illegal immigrants off the hook through “de facto amnesty.” This irresponsible direction not only compromises public safety, but also leaves illegal aliens without any sort of official determination of status or directions for how to proceed.

Most recently, Biden’s U.S. Citizenship and Immigration Services issued June 24 policy guidance reinterpreting the law and, in effect, waiving explicit language in the Immigration and Naturalization Act stating that illegal aliens who were previously “unlawfully present” for at least six months are barred from returning to the U.S. for three or 10 years after “departure or removal.”

In short, U.S. Citizenship and Immigration Services will approve of prior lengthy illegal presence.

What’s more, the Biden administration is sending the message that if deportable illegal aliens have willingly left or been removed from the United States, they can enter again unlawfully and stay in the interior of the U.S. as many days as they wish.

It also opened the door for illegal aliens whose applications were previously denied on these inadmissibility grounds to submit a motion to reopen their case any time before Dec. 27. (Normally, a motion to reopen must be filed within 30 days of a decision.)

You read that right: The written law is “irrelevant” to the Biden administration.

Meanwhile, the administration continues to refuse to release the congressionally required ICE Enforcement and Removal Report for fiscal year 2021.

The most obvious conclusion is that the Biden administration wants to effectively do away with ICE and immigration enforcement, hide the glaring issues that come along with nonenforcement policies, make it appear that all is well at the border, and dodge all responsibility by escaping congressional oversight and the criticism of the American people.

Although the president himself says he’s “working on” abolishing ICE, actions speak even louder than words.

Biden’s border policies and directives are some of the clearest examples proving that he bows to the demands of far left, open-borders activists. Day in and day out, this administration’s actions reveal nothing but disregard for national security and public safety, and disdain for the enforcement of the rule of law in this country.