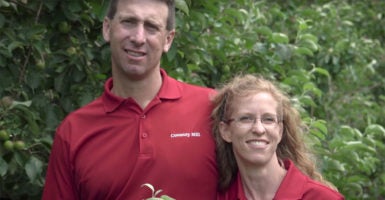 Steve and Bridget Tennes own a 120-acre farm in Charlotte, Michigan, where they raise their five children. (Photo: The Daily Signal)

The case of a Michigan city that banned family farmers from selling their goods at a local farmers market due to their religious beliefs about marriage headed to court Wednesday, where lawyers from both sides argued before a federal district judge.

Lawyers for Steve and Bridget Tennes, owners of Country Mill Farms in Charlotte, Michigan, asked the court to grant the Tennes family a preliminary injunction, a temporary order that would allow them to sell their produce at the East Lansing Farmer’s Market while the case proceeds.

“Since June 1, we’ve already missed three and a half months of being able to attend East Lansing Farmer’s Market, where we’ve served everyone for the last seven years,” Steve Tennes told The Daily Signal by phone after the hearing.

“Now we only have about six weeks left of the market to be able to sell, and the … East Lansing Farmer’s Market was the largest farmers market [where] our family sold organic apples and cider.”

In May, the Tenneses filed a federal lawsuit against East Lansing after the city banned them from selling produce at its farmers market because they said on Facebook that they don’t host same-sex weddings on their farm.

“Due to our religious beliefs, we do not participate in the celebration of a same-sex union,” they wrote in part on Facebook in August 2016.

The city responded by filing a motion to dismiss the lawsuit. Both motions were heard for an hour Wednesday before Judge Paul Maloney.

Maloney did not issue an oral decision, but is likely to issue a written order in coming weeks.

Country Mill Farms is located 22 miles from East Lansing in the neighboring town of Charlotte. The Tenneses, who never received a discrimination complaint, say selling their apples and other goods at the city’s farmers market was an important source of income.

The Tenneses are represented by Alliance Defending Freedom, a Christian legal nonprofit that also represents Jack Phillips, the Colorado baker whose case is going to the Supreme Court after he declined to create wedding cakes for same-sex couples.

John Bursch, a Michigan lawyer who argued before the Supreme Court in favor of that state’s ban on same-sex marriage in the landmark Obergefell v. Hodges case, recently joined Alliance Defending Freedom in defending the Tenneses.

The Daily Signal sough comment from city officials but did not receive a response by publication time. In an interview with the Lansing State Journal, East Lansing Mayor Mark Meadows said businesses need to “act in a certain way” to sell their goods on city property.

“It has nothing to do with free speech,” Meadows said. “They can say whatever they want, but their corporation needs to act in a certain way to qualify to sell products at the East Lansing Farmer’s Market on publicly owned land.”

Lawyers on both sides vowed to appeal if necessary. Because only a few weeks remain for the Tenneses to sell produce, they are hoping for a swift decision.

“We think the law is fully behind us, that the city has reached beyond its borders to specifically punish one farmer because of his beliefs,” said Kate Anderson, a lawyer for Alliance Defending Freedom who argued the Tenneses’ case.

“No one should have to censor their views to participate in a market and no one should have their economic freedom threatened just because of what they believe,” Anderson said. “We’re hopeful the judge will rule quickly on that basis.”

This article was updated to correct the month the Tenneses filed their lawsuit.