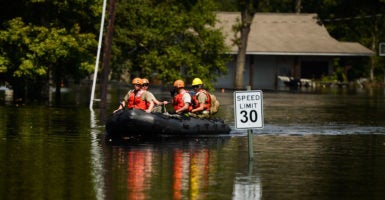 Senate lawmakers voted Thursday afternoon to advance a bill that would provide emergency relief funding to the victims of Hurricane Harvey and would temporarily raise the debt ceiling and fund the government through mid-December.

Lawmakers voted 80-17 in favor of sending the bill back to the House for renegotiations. The Senate’s vote comes off the heels of the measure passed in the House Wednesday, which allocated $7.85 billion for Hurricane Harvey relief funding with near-unanimous support.

The large emergency funding package, linked to the debt ceiling and government spending, could be the result of a contentious deal struck in the Oval Office Wednesday afternoon. Instead of aligning with members of his own party and administration, President Donald Trump agreed to raise the debt limit and fund the federal government through mid-December, allowing members of Congress to deal with the federal budget in the coming months.

The president could sign the bill Friday, which would allow Congress to reconvene on the debt ceiling and funding the government Dec. 8.