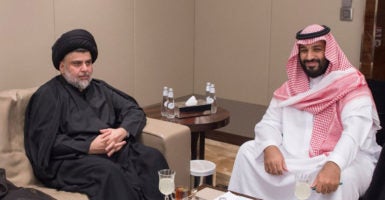 The Iraq-Saudi Arabia relationship, while historically rocky, appears to be on the mend.

Saddam Hussein’s invasion of Kuwait in 1990 prompted Saudi Arabia to close its border with Iraq. Since then, only Iraqi religious pilgrims have been allowed to cross once a year during the hajj season.

After 27 years, the two nations are now planning to reopen the border crossing for trade. This decision came shortly after the Saudi Cabinet’s announcement that it had established a joint trade commission with Iraq.

The Iraq-Saudi Arabia relationship has been marginally influenced by Iran’s shifting political situation. Prior to 1979, the Saudis were wary of Hussein and suspected him of supporting movements that were hostile to Saudi interests.

The Iranian Islamic Revolution of 1979 dramatically changed that relationship. Ayatollah Ruhollah Khomeini’s rise to power and the Iranian decree of Islamic revolution incited fear among both the Iraqis and the Saudis pushing them into greater cooperation.

This cooperation continued during the Iran-Iraq War, when, though technically neutral, Saudi Arabia provided Iraq with financial assistance and energy security, even permitting the Iraqis to build a pipeline across Saudi Arabia to avoid Iranian attacks on ships carrying its oil exports.

However, the 1990 Iraqi invasion of Kuwait harmed Iraqi-Saudi relations. There was concern that Hussein’s armies would cross into Saudi Arabia’s northern border, which they eventually did before being repulsed.

The Saudis shut down their Baghdad embassy, cut diplomatic ties, and closed the border with Iraq. Saudi Arabia went on to oppose the United States’ invasion of Iraq in 2003 over concerns that it would benefit Iran and pose a future threat to regional stability and security.

Iran’s relationship with Iraq was particularly hostile until the removal of Hussein from power. Hussein’s regime was dominated by a secular Sunni minority running a predominantly Shiite country. In the eyes of revolutionary Iran, this was unacceptable.

Consequently, Iraq acted as a balancing power in the region for years up until Hussein’s ouster.

When the U.S. ousted Hussein after its invasion in 2003, leading to its replacement by a Shia-dominated government, Iran saw an opportunity to dominate its neighbor in such a way that Iraq would no longer be a military threat.

Today, growing Iranian influence is increasingly threatening regional stability in the Middle East. The current chaos and the rise of the Islamic State have created conditions allowing Iran to gain a significant foothold in the country.

Iran has created transportation and logistical infrastructure to move soldiers and weapons through Iraq to proxy forces in Syria and Lebanon. It has provided training and munitions to Iraqi militias and assisted in attacking U.S. troops.

Iran is backing the anti-Saudi, Houthi rebels in Yemen and has recently threatened military action against Saudi Arabia.

An Iran-friendly Iraq is bad news for Saudi Arabia.

Religious divisions between Shiite and Sunni populations are a predominant source of tensions in the Middle East. Iraq and Iran are both largely Shiite nations, while Saudi Arabia is Sunni with a Shia minority.

An Iraq-Iran alliance could further destabilize the region and pose a direct threat to the Saudis.

Saudi Arabia is attempting to counter Iranian influence by investing in its northern neighbor. Saudi Arabia appointed a nonresident ambassador to Iraq in 2012, and in 2016 reopened its Baghdad embassy. The Saudi ambassador to Iraq noted that the reopening would allow the countries to cooperate on anti-extremism efforts.

Additionally, the crown prince has agreed to examine other potential investments in the southern regions of Iraq.

Now, Saudi Arabia is reopening its 506-mile border with Iraq. This action signifies Saudi Arabia’s commitment to preventing an Iranian hegemon in the region, and it marks an effort to improve ties between Saudi Arabia’s Sunni government and its Shiite-dominated neighbor to the north.

In a surprising event, the influential Shiite, Iraqi cleric Muqtada al-Sadr travelled to Riyadh to meet with Crown Prince Mohammed bin Salman. The meeting resulted in Saudi Arabia agreeing to donate $10 million in aid to the Iraqi government.

Sadr has long commanded a large following of Iraq’s poorer populations and has been an anti-American, Iranian ally for most of the post-Hussein era. But his recent outreach to the Saudis could signal a positive breakthrough in not only Saudi-Iraq relations but Arab Sunni-Shiite relations as well.

The time is ripe for Saudi Arabia to build positive diplomatic relationships with Iraqi leaders and politicians. As the Islamic State loses power, Iraq will be looking to restore stability to its people.

Saudi Arabia will play an important role in both strengthening Iraq and maintaining greater regional stability if both sides allow this relationship to progress.