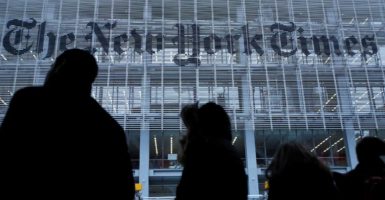 The New York Times is pushing fake news about book sales, according to a top conservative publisher.

Citing bias and favoritism toward liberal writers and a lack of transparency, Regnery Publishing President and Publisher Marji Ross told The Daily Signal that the company will stop recognizing the Times’ best-sellers list, which has been used as a prominent measure of success in the industry.

This means that Regnery will no longer print a banner on books mentioning the Times’ best-sellers list, that it will no longer be included in marketing, and it won’t appear on Regnery’s website.

Ross also said the list will stop being used as a basis for bonuses and author contracts.

“Unlike The New York Times, they don’t have a secret formula for calculating their list,” Ross said. She continued:

We looked at the BookScan numbers from a given week, the book sales data, and we had a book by Dinesh D’Souza called “The Big Lie.” And according to BookScan, that book sold in that case more than 12,000 in a week. And more importantly, more copies than any other book on the New York Times best-sellers list. And yet one week it was ranked No. 7 and another week it was ranked No. 8.

After years of bias from @NYtimes bestseller list, Regnery announces we want nothing more to do w/ NYT. From @AP: https://t.co/rBqte1jyAE

This lowball ranking prompted Regnery to act and move away from relying on The New York Times, which Ross said has frequently and increasingly underestimated the sales of Regnery’s authors.

It was a pattern she could no longer ignore, and though Ross wouldn’t speculate about the reactions of other publishers, she said it was important to protect her writers and readers from misleading information.

“There’s no room for editorializing on any best-sellers list,” Ross said. “It should simply be a straight up report on sales.”

The Times, however, said its list is fair and accurate despite accusations otherwise.

“Our goal is that the lists reflect authentic best-sellers,” Times spokesman Jordan Cohen said, according to the Associated Press.

“The political views of authors have no bearing on our rankings, and the notion that we would manipulate the lists to exclude books for political reasons is simply ludicrous.”

But Ross said the Times makes a “ridiculous argument” when it suggests the deck isn’t stacked against conservative authors.

“That’s like a Las Vegas casino saying the Blackjack tables weren’t rigged to make the house win because look at all these people winning,” Ross said.

Regnery was founded in 1947 and has published some of the most important books in the conservative canon, including William F. Buckley’s famed “God and Man at Yale,” Russell Kirk’s “The Conservative Mind,” and Whittaker Chambers’ “Witness” (although, as grandchild David Chambers reminds, it was Random House that published Witness in 1952—when it was a New York Times bestseller for many weeks).

Today, it prints books by influential conservatives like Mark Levin, Laura Ingraham, and former House Speaker Newt Gingrich, among many others.

Given Regnery’s role as a leader in conservative publishing, its departure from using the Times’ best-sellers list is a big deal. It could be a signal that more conservative publishers will stop using liberal media to get the word out on their products.