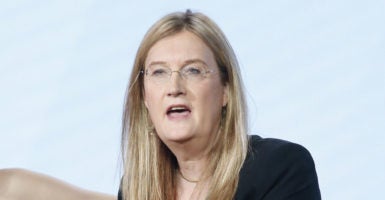 Anti-trans bigotry exists. It’s wrong, and we should all condemn it. I condemn it in my new book “When Harry Became Sally: Responding to the Transgender Moment.”

But we lose the ability to effectively call out bigotry when all disagreement is condemned as bigoted—and when lies are told in the process.

That’s what happened earlier this week in a New York Times op-ed. Jennifer Finney Boylan, a contributing opinion writer for the Times, and a professor of English at Barnard College of Columbia University, told several bald-faced lies about my work. I’m surprised the editors published it.

For the record, Boylan never contacted me regarding my research or my book. Nor did the Times contact me to verify any of the claims made about me in the column.

Boylan claims I wrote “a book that suggests that transgender people are crazy, and that what we [people who identify as transgender] deserve at every turn is scorn, contempt, and belittlement.”

Good luck finding a single line from my book to back up either claim. I wrote nothing of the sort. On the contrary, at several points in the book I admonish my fellow social conservatives not to treat people who identify as transgender with “scorn, contempt and belittlement.”

Indeed, the introduction to the book notes that:

Chapter 3 presents the stories of several people who found that transitioning didn’t bring the peace and wholeness they sought, but only new problems. The stories of detransitioners complicate the sunny picture frequently presented in the media. Many of these people recall a feeling of being pushed into transitioning, as if there were no other options, and they wish that medical professionals had made an effort to help them understand the deeper psychological issues that alienated them from their own bodies. Many regret the permanent damage done to their bodies, and some who transitioned as teenagers believe they were not mature enough to make such consequential decisions. Some feel that their dysphoria resulted from social hostility to people who don’t conform to gender norms or who have same-sex attractions.

The very next sentence reads: “In this light, social conservatives (including myself) should take care to be respectful and compassionate toward people we may disagree with.”

I repeat the point in Chapter 3 itself, writing: “This charge should prompt social conservatives (like myself) to be careful not to attack or marginalize people as we advocate for the truth.”

The admonition appears once again in the conclusion: “First and foremost, as we advocate for the truth, we must be careful not to stigmatize those who are suffering.”

And the book practices what it preaches. That’s also why the Times op-ed was unable to produce even a snippet from the book to back its baseless claim that I urge treating people who identify as trans with “scorn, contempt and belittlement.”

Then there’s Boylan’s assertion that I “suggest that transgender people are crazy.” Nowhere do I make any such suggestion.

Throughout the book, I point out that the feelings that people who identify as transgender report are real—they really feel a disconnect with their bodily sex—but I also acknowledge the fact that those feelings don’t change bodily reality. I recognize the real distress that gender dysphoria can cause, but never do I call people experiencing it crazy.

I repeatedly acknowledge that gender dysphoria is a serious condition, that people who experience a gender identity conflict should be treated with respect and civility, that we need to find better responses to people struggling with their gender identities.

Anyone who has read my book would know all of this. Sadly, it appears that Boylan did not. The hit piece contains no discussion of what I actually wrote, no quotation of my words, not even the briefest summary of a single claim I actually make. Instead, it links to a “review” of the book by Zack Ford, a gay rights activist at ThinkProgress.

Simple. Please quote the passage where I "call them mentally ill." You can't quote that passage because it doesn't exist. Zack, you lie repeatedly, and your lies have caught up with you. The Post had to entirely rewrite their story because they believed your lies. https://t.co/igcDy4L2sF

Indeed, Ford was unable to quote any passage.

This isn’t the first time that a mainstream media outlet fell for Ford’s misreporting. Before the book was released, The Washington Post wrote an embarrassingly bad story about it, chock full of factual errors. By the end of the day the Post had entirely rewritten the first half of the piece, but never even acknowledged its errors.

Americans disagree about gender identity and the best approaches to treating gender dysphoria. Boylan claims my book is “abundant in junk science,” but couldn’t point to anything in particular that I got wrong.

As I explain in “When Harry Became Sally,” contrary to the claims of activists, sex isn’t “assigned” at birth—and that’s why it can’t be “reassigned.” Sex is a bodily reality that can be recognized well before birth with ultrasound imaging. Cosmetic surgery and cross-sex hormones don’t change the deeper biological reality.

People who undergo sex-reassignment procedures do not become the opposite sex—they merely masculinize or feminize their outward appearance.

The medical evidence suggests that sex reassignment does not adequately address the psychosocial difficulties faced by people who identify as transgender. Even when the procedures are successful technically and cosmetically, and even in cultures that are relatively “trans-friendly,” transitioners still face poor outcomes.

In truth, very little is understood about the causes of discordant gender identities, and yet we are now promoting radical, experimental therapies for children. Starting a child on an experimental process of “social transitioning” followed by puberty-blocking drugs and cross-sex hormones was unthinkable not long ago. It should still be today.

A more cautious therapeutic approach begins by acknowledging that 80 to 95 percent of children with gender dysphoria will grow out of it naturally. Many experts think of gender dysphoria as being much like other kinds of dysphoria, or serious discomfort with one’s body, such as anorexia.

The most helpful therapies do not try to remake the body to conform with thoughts and feelings—which is impossible—but rather to help people move toward accepting the reality of their bodily selves.

Children are especially vulnerable. We need to respect the dignity of people who identify as transgender, while also doing everything possible to protect young people and foster their healthy development. That will require a better conversation about these issues, and that’s why I wrote my book.

How sad that The New York Times, The Washington Post, and ThinkProgress refuse to participate in that conversation.