Congress Has About 60 Days Left. Here’s What Conservative Groups Think of the Progress It Has Made. 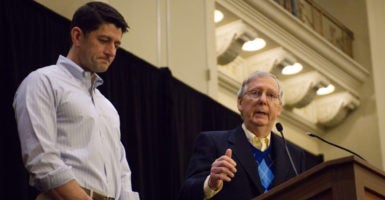 In 2017, the House has about 50 scheduled days left in session, while the Senate has 60. (Photo: Bastiaan Slabbers/ZUMA Press/Newscom)

Congress has roughly 60 legislative days left in 2017, and conservatives want lawmakers to follow through on their promises.

“The congressional agenda would be daunting even if lawmakers were content to just keep the trains running on time,” Dan Holler, spokesman for Heritage Action for America, the lobbying affiliate of The Heritage Foundation, told The Daily Signal in an email.

“The reality is that given the failures of the last eight months, securing major conservative policy wins is essential.”

Those included repealing and replacing Obamacare, reforming the tax code, funding the border wall, confirming a justice to the Supreme Court, raising the debt ceiling, and addressing regulations handed down by President Barack Obama.

Jenny Beth Martin, president of Tea Party Patriots, told The Daily Signal in a phone interview that conservatives are “very disappointed” about Obamacare.

Three Republican senators joined Democrats in a vote on July 28 against partially repealing and replacing Obamacare.

However, Congress has made some progress on the goals set at its retreat.

The House has taken steps to fund President Donald Trump’s border wall and the Senate has confirmed Neil Gorsuch to the Supreme Court. And using the Congressional Review Act, Trump worked with Congress to rescind more regulations than any other president.

>>> Related: 13 Ways Trump Has Rolled Back Government Regulations in His First 100 Days

Jason Pye, vice president of legislative affairs at FreedomWorks, told The Daily Signal in an email that Trump’s deregulatory work is paramount.

Carrie Severino, chief counsel and policy director of the Judicial Crisis Network, praised the judicial accomplishments of the Trump administration in a phone interview with The Daily Signal.

“I think one of the biggest accomplishments of both the administration and the Senate was getting Justice Neil Gorsuch confirmed,” Severino said. “He faced unprecedented levels of partisan opposition from the Democrats, but he was so well qualified and such an excellent nominee that I was pleased that they didn’t bow to that.”

However, as Congress begins its first week back on Capitol Hill since its August recess, much of the priorities have yet to be met.

“Obviously, fundamental tax reform will be a big focus for us, and it’s an all hands on deck effort,” Pye said.

“With repeal of Obamacare clearly on the back burner, nearly all the attention and effort will be on tax reform,” Holler said. “If Congress and the Trump administration can deliver on pro-growth tax reform without going on a reckless, hurricane-induced spending binge this fall, they will have a lot to be proud of.”

“The president started with a historically high number, higher than four of his five predecessors, 105 vacancies to start with, but then it’s now up to 144,” Severino said, adding:

So that’s more than a third increase in the number of vacancies and only four justices have been confirmed so far. We really need to pick up the pace in order to even just keep up with the upcoming vacancies, so that is something I am hoping that the Senate will be able to do as the year comes to a close.

Martin said she wants to see spending cuts. “We want to see any debt ceiling increase tied to real spending reform, not just increasing the debt ceiling with no effort to work towards a balanced budget.”