The Rise of Gingrich in the Reagan Revolution 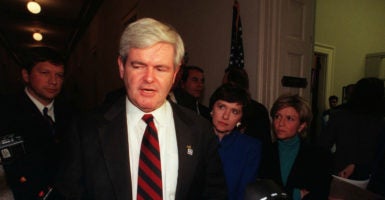 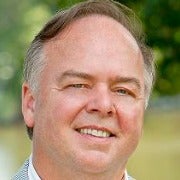 The Republican House was divided against itself: President Ronald Reagan, his Crazies, and much of the muscular New Right on one side—the GOP establishment, moderate Vice President George H.W. Bush, and Minority Leader Bob Michel on the other.

The Crazies—Reps. Newt Gingrich and Robert Smith Walker—sent a scathing letter to their GOP colleagues, calling for support for an Ethics Committee investigation of no less than 17 Democratic members. They said the House was experiencing a “crisis of corruption.”

The letter repeatedly referred to “corrupt,” “corruption,” and “unethical.”

Of the 17 members, one was the incontestable Charlie Wilson of Texas, who a few years later would be under investigation for cutting the funding for two planes for the Defense Intelligence Agency because “it refused to let his girlfriend fly with him in a government plane in Pakistan in 1986.”

Still, the vast majority of the bill of particulars against the Democrats was filled with serious and multiple examples of fraud, bribery, vote selling, racketeering, and “Tammany Hall.”

Mark Twain was right. Congress was America’s only native criminal class. Gingrich and Walker kept up the drumbeat for weeks.

Just one day before the November showdown between Reagan and Jimmy Carter, most political writers were sticking to their prognostications of a “too close to call” election. Reagan, according to the wire services, was ahead in the Electoral College, barely ticking to the requisite 270.

The story, which ran just three days before the first Tuesday after the first Monday, confidently predicted only modest gains in the House and Senate.

Gingrich wrote the Reagan high command an unsolicited memo offering advice on the South: “The only way . . . [to] understand it is to go see a couple of Burt Reynolds movies to realize that Jody Powell and Hamilton engaged in a barroom brawl.”

Reagan blew out Carter by almost 9 million votes and swamped him in the Electoral College. Forty-three Republicans took control of the Senate for the first time in more than 30 years and, with the addition of what would become known as “Boll Weevil” Democrats, operational control of the House.

The GOP handsomely added governors and state legislators. It was a rout of historical proportions.

Dazed Democrats promised Reagan a honeymoon of up to six months. A Democratic operative went so far as to say, “There’s a lot of good feelings for Ronald Reagan on the Democratic side.”

On the other hand, there were a lot of shots fired across the bow of the incoming Reaganites about not touching sacred cow social programs, but Gingrich was, as always, on offense, saying Reagan should not “nibble” at the federal budget but instead take “big chunks.”

He also feared Reagan would be easily outmaneuvered by House Speaker Tip O’Neill.

“The period between a presidential election and the following January 20th is normally one of the calmest in Washington.” So opined the National Journal in the latter half of 1980.

“The winning candidates for the White House and Congress recuperate and begin to plan what they will do with their mandates. The losers quietly and quickly fade away. And the rest of the nation tunes out Washington to focus on football and the holidays.”

Gingrich, quoted in another article, simply said, “Some things I do really antagonize the Democrats.”

The black-owned Atlanta Daily World had endorsed both Gingrich and Reagan. While its support of Gingrich was no surprise, the Reagan endorsement was far from certain, given his campaign promises to cut the budget and a number of social programs.

After both won in landslides, the stage was set for fireworks in Washington.

Gingrich was more than prepared to really antagonize the Democrats now. The Cold War was raging, and the election of Reagan did anything but reduce tensions between the West and the East.

Gingrich was even more hardline when it came to the Soviets than Reagan was. He wrote a thoughtful piece for The Washington Post on military policy, raising the new concern that the problem in the Cold War was not just matériel, but the superiority of the leadership of the Soviet officer corps over the West’s.

“The danger is not merely that the Soviet Union has more men, spends more money, or has more equipment than we do,” said Gingrich. “The danger is that their officer corps has begun to be better trained intellectually, more deeply steeped in history, and is asking the right questions about war.”

He wasn’t for blindly throwing money at the Pentagon, however. “It doesn’t matter how much money you spend if you spend it badly.”

His rhetoric could be grating, even unnerving. He had become involved in a small group of defense-interested representatives. As he said to The Wall Street Journal, “We are the war-winning military-reform group. It is our determination that if we have to go to war we will win.”

He also supported the development of the controversial neutron bomb, which could kill people but leave buildings intact. In the aftermath of Vietnam, with the GOP already accused of being “warmongers,” Gingrich’s comments sent up red flags among many.

For him, though, the phrase “permanent offense” never had to be explained.

Of the Democrats, he told The Wall Street Journal, “You are seeing the marriage of McGovern-type policies of redistribution for the poor and Hoover-type policies for the really wealthy, combined with the … machine political vision of keeping all power in the hands of the politicians by considering tax cuts only one year at a time.”

The paper called him a “brash, cocky Georgian.”

This excerpt was used with permission from Craig Shirley’s new book, “Citizen Newt: The Making of a Reagan Conservative” (Nelson Books, 2017).