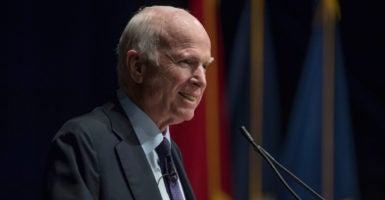 Sen. John McCain is introducing a legislative fix for the Obama-era Deferred Action for Childhood Arrivals program that will likely infuriate Republicans and the White House.

McCain, R-Ariz., along with Sen. Chris Coons, D-Del., will announce a bill Monday that provides a pathway to citizenship for roughly 800,000 illegal immigrants, no funding for the president’s border wall (or other border technology), and requires a comprehensive study to determine what border security measures are needed.

“For months, I have been calling on my colleagues to complete a bipartisan budget agreement to lift the caps on defense spending and fully fund the military. While reaching a deal cannot come soon enough for America’s service members, the current political reality demands bipartisan cooperation to address the impending expiration of the DACA program and secure the southern border,” McCain said in a statement.

The White House is asking for roughly $25 billion for the construction of a border wall along some 700 miles of the southern U.S.-Mexico border. Border wall funding is one of the president’s primary demands of any immigration bill and he has the backing of some of the hard-line immigration hawks in the House and Senate.

House and Senate Republicans are willing to grant legal protections for the 620,000-800,000 “Dreamers,” but the crux of the immigration debate is what happens with chain migration. Republican lawmakers do not want to extend legal status or a pathway to citizenship for “Dreamers'” extended family members.

Arguably the only silver lining for Republicans is that McCain is offering an annual $110 million grant for five years to help improve coordination between federal, state, and local law enforcement officials.

In order to improve the system, McCain and Coons are asking the Department of Homeland Security to figure out a way to increase border security awareness and border control by 2020. Additionally, the senators are asking the State Department to devise a three-year strategy to address the root causes of immigration from Central American countries.

President Donald Trump has given lawmakers until March 5 to figure out a legislative fix for “Dreamers.” Congress, in addition to figuring out an immigration strategy, has until midnight Friday to come to an agreement on a government funding bill.