Hollywood Wants to Force This Profanity-Filtering Service Out of Business, and May Succeed 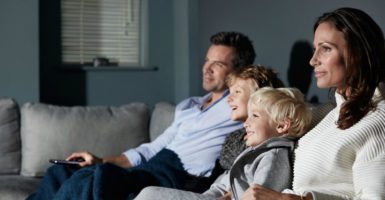 VidAngel, a service that allows viewers to filter out select content, is being sued by major Hollywood studio companies. (Photo: iStock Photos)

The ideological and philosophical divide between Republicans and Democrats has seldom, if ever, been broader and deeper, and the divide between partisans in the degree of their aversion to swearing in feature films is just the latest manifestation of that.

A new Harris poll—commissioned by the makers of a forthcoming faith-based film, “Generational Sins,” that itself reportedly contains 32 profanities—found that Republicans are offended by swearing more than Democrats are, by a margin of nearly 2-to-1.

Nearly half (45 percent) of Republicans surveyed, compared with just 1 in 4 (25 percent) Democrats, find the “F-bomb” objectionable, for example, the poll found.

Among all respondents, however, the poll found the use of “Jesus Christ” as a profanity and “G.D.” both narrowly edged out the four-letter F-word as vulgar dialogue that would keep them from seeing a movie if they knew ahead of time they were used in the film.

One in three (33 percent) of those surveyed objected to using “Jesus Christ” as an expletive. Thirty-two percent said the same about “G.D.,” while 31 percent said “f—” would keep them from buying a ticket.

Among evangelical Christians, the corresponding numbers were 90 percent, 86 percent, and 74 percent, respectively.

The poll also found a divide along other demographic lines, with Christians, not surprisingly, objecting more than non-Christians. More women object to the use of the “F-bomb” in movie scripts (37 percent to 26 percent).

Objections also increased with age, with more than half of those over age 72 telling the pollster they would shun movies with strong profanity.

“Milder” profanities, among them “sh–,” “p—,” “damn” and “hell,” were found objectionable at lower rates across all demographics.

It’s all a far cry from the days of “Gone With the Wind,” when in 1939, producer David O. Selznick agonized over whether to tone down Rhett Butler’s famous retort to Scarlett O’Hara, “Frankly, my dear, I don’t give a damn,” out of concern for moviegoers’ sensibilities.

Given today’s anything-goes ethos in Hollywood, it seems positively quaint that Selznick would have to defend the line before members of the film industry’s self-regulating Hays Code.

“It is my contention that this word as used in the picture is not an oath or a curse,” Selznick said. “The worst that could be said of it is that it’s a vulgarism.”

Alas, that was then, and this is now.

At one time, not so long ago, it was widely believed that swearing represented intellectual poverty or at best, the sign of a stunted vocabulary. But revisionism apparently is no longer limited to history.

In the April 2016 article “Is Swearing a Sign of a Limited Vocabulary?” Scientific American reported on studies that sought to debunk the “poverty of vocabulary” explanation for the use of profanity.

“This research has led to a competing explanation for swearing: Fluency with taboo words might be a sign of general verbal fluency,” Piercarlo Valdesolo wrote. “Those who are exceptionally vulgar might also be exceptionally eloquent and intelligent.”

Thus, with the mainstreaming of the acceptability of swearing, and movies, cable TV, and streaming services arguably leading the charge, what the “bleep” is a person who doesn’t want to hear all the “@#$%^&*” to do?

One recourse is VidAngel, a video-filtering service that enables subscribers to filter out profanity and other graphic and objectionable material (nudity, sex, violence, drug use, and the like) from content on Netflix, Amazon Prime, and other streaming services, making them more family-friendly.

VidAngel has said that 96 percent of its customers filter at least two items—and an average of 17—from a typical film.

Regrettably, however, VidAngel—begun by four brothers who grew up in Idaho—is in an existential legal battle with leading production companies, including Disney and Warner Brothers. They accuse the Palo Alto, California-based company of copyright infringement.

VidAngel argues that viewers should “have the choice to watch however the bleep [they] want,” and insists that it “just facilitates that.” It contends that the federal Family Movie Act of 2005 protects its customers’ right to use its service to filter films.

Federal court rulings—as recently as Aug. 2 at the 9th U.S. Circuit Court of Appeals—have consistently gone against VidAngel, however.

If VidAngel is forced out of business, the large numbers of people who told the Harris pollsters they found film profanity objectionable will be left with little recourse but to stick their fingers in their ears.