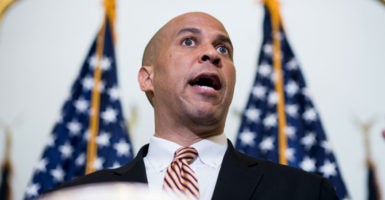 “This is just one step. We have much work to do,” Sen. Cory Booker, D-N.J., says of his proposal to remove Confederate statues from the U.S. Capitol building. (Bill Clark/CQ Roll Call/Newscom)

Sen. Cory Booker plans to propose a bill to remove all Confederate statues from the United States Capitol building, he announced Wednesday.

“I will be introducing a bill to remove Confederate statues from the US Capitol building,” Booker, D-N.J., tweeted. “This is just one step. We have much work to do.” He did not offer any information as to when he would introduce his bill.

I will be introducing a bill to remove Confederate statues from the US Capitol building. This is just one step. We have much work to do.

The Congressional Black Caucus also proposed Confederate statues get taken down from the U.S. Capitol building.

“We will never solve America’s race problem if we continue to honor traitors who fought against the United States in order to keep African Americans in chains. By the way, thank god, they lost,” Rep. Cedric Richmond, D-La., chairman of the Congressional Black Caucus, told ABC News in a Monday statement.