How the Latest GOP Health Care Bill Stacks Up 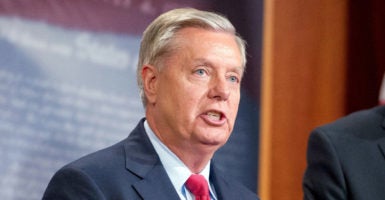 After last month’s disappointing failure to roll back Obamacare’s damage, senators are now reflecting on how best to proceed.

One approach reportedly under consideration is a bill put together by Sens. Lindsey Graham, R-S.C.; Bill Cassidy, R-La.; and Dean Heller, R-Nev.

Relief from Obamacare includes three major elements: regulatory relief, financing reform through tax cuts, and Medicaid reform. It is critical that Congress act on these issues—every day that goes by that Congress does not repeal Obamacare hurts Americans and further damages our health system.

However, many needed reforms are outside the scope of the current legislative effort, which is limited by the constraints of the congressional budget reconciliation process.

Consequently, just like the bills that were passed by the House but failed in the Senate, the Graham-Cassidy-Heller bill falls short of fully repealing Obamacare and replacing it with a new system that supports patients and doctors.

We’ve been keeping track of how the various bills under consideration measure against the three major elements of regulatory relief, tax cuts, and Medicaid reform. Our updated chart shows how the Graham-Cassidy-Heller bill compares to the other bills.

The Graham-Cassidy-Heller bill incorporates a number of provisions contained in the Senate Better Care Reconciliation Act—specifically, those that provide regulatory relief, eliminate the individual and employer mandate penalties, and make it easier for states to waive federal insurance mandates, thus restoring their authority over their insurance markets.

Those provisions would help reduce insurance premiums and promote access to insurance in the short run.

Like the Better Care Reconciliation Act and the House-passed bill, the Graham-Cassidy-Heller bill would reform the federal financing of state Medicaid programs to help refocus Medicaid on those most in need.

Also like those bills, it would expand health savings accounts to make it easier for middle-income and upper-income families to save for routine health costs and pay premiums.

However, the Graham-Cassidy-Heller bill has major defects in a couple of key areas.

Second, it takes policy in the wrong direction by spending the money from the Obamacare taxes on a new welfare block grant program to states. This means it just changes which bureaucrats are micromanaging people’s health care (state instead of federal).

The better approach would be to enact policies that directly empower patients by giving them the opportunity and means to buy the health plan that best meets their needs—instead of letting bureaucracies and special interests decide how those tax dollars are spent.