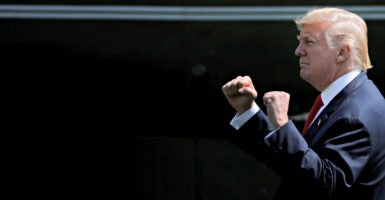 President Donald Trump prepares to board Marine One on the South Lawn of the White House on Friday, heading for his golf club in Bedminster, New Jersey, for a 17-day working vacation. (Photo: Carlos Barria/Reuters/Newscom)

Just ahead of President Donald Trump’s 200th day in office, the Senate confirmed dozens of his nominees in a significant sign of a stepped-up pace to fill jobs, including judgeships.

“When political leaders are in place, the president can run the government more effectively, achieve his priorities,” @RPublicService says.

In all, the Senate on Thursday unanimously confirmed 78 nominees, among them three judges and seven military officers. The remaining confirmations were for civilian political appointees across the executive branch.

The confirmations, however, bring the president to the point of having only 20 percent of his appointed posts filled.

Among them is new FBI Director Christopher Wray, confirmed Tuesday by a Senate vote of 92-5 and sworn in shortly afterward.

Of 279 nominations so far, Trump has won 124 confirmations, according to data compiled by the Partnership for Public Service . The organization limits its measurement to 577 key administration positions, not counting military, judiciary, and lower-level civilian appointees. The Senate’s mass confirmations Thursday by unanimous consent should be welcome news for Trump, said Max Stier, CEO of the Partnership for Public Service.

“When political leaders are in place, the president can run the government more effectively, achieve his priorities and deal strategically with crises,” Stier told The Daily Signal in a prepared statement. “Since only about 20 percent of Trump’s top appointees are in place, there is much more for the administration and the Senate to do, but these confirmations should be celebrated as good progress.”

Trump still trails his recent predecessors, and has blamed this on Senate Democrats’ obstructionism. Still, some conservatives note that Trump hasn’t nominated administration officials at the same pace as previous presidents.

Both the White House and Senate Democrats have slow-walked nominations and confirmations, said Robert Moffit, a senior fellow at The Heritage Foundation and a former assistant director for the Office of Personnel Management under President Ronald Reagan.

“I don’t know who is more to blame,” Moffit told The Daily Signal. “The White House personnel office is not doing a good job vetting new nominees. The Senate Democrats have taken partisanship to the point of doing damage to the country.”

Monday, Aug. 7, will be the 200th day since Trump took the oath of office. The Senate is going into recess through August and Trump will be on a working vacation in New Jersey for more than two weeks.

President Bill Clinton had 252 of his 345 nominees confirmed by the same point, while President George H.W. Bush had confirmations for 208 of his 315 nominees.

The bulk of the Senate’s confirmations for the Trump administration were in the State Department.

They include Mark Andrew Green, a former Wisconsin congressman, as administrator of the U.S. Agency for International Development; Syracuse law professor Nathan Alexander Sales as coordinator for counterterrorism (with the rank and status of ambassador at large); former Sen. Kay Bailey Hutchison, R-Texas, as permanent representative on the council of the North Atlantic Treaty Organization (with the rank and status of ambassador); and Kelley Eckels Currie as U.S. representative on the Economic and Social Council of the United Nations (with the rank of ambassador).

The confirmations were part of a package negotiated between Senate Republicans and Democrats which was approved by a voice vote.

The White House is encouraged by the progress but stresses there is more work to do, one senior official told The Daily Signal.

The package included confirmation of Susan M. Gordon as principal deputy director of national intelligence; David Malpass as undersecretary of treasury; Jessica Rosenworcel and Brendan Carr (a reappointment) for the Federal Communications Commission; plus nominees for top jobs in the Veterans Affairs, Transportation, and Health and Human Services departments.

In a separate vote, outside the broader package, the Senate confirmed Dan R. Brouillette of Texas, a senior vice president for USAA, the leading financial services company for veterans, as deputy secretary of energy by a vote of 79-17.

The slow pace of nominations and confirmations is a significant disservice to Trump and the voters that supported him, Heritage’s Moffit said.

“You can’t get change if you don’t have change agents,” he said.