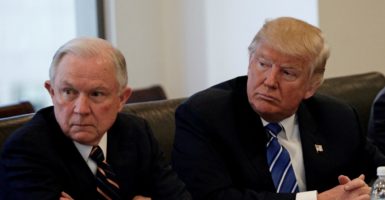 “We support Attorney General Jeff Sessions and believe he is the right man, and the best man, to lead the Justice Department at this time,” reads a memo released Friday from the Conservative Action Project and signed by dozens of conservative leaders.

Sen. and now Attorney General Jeff Sessions has been a loyal, highly visible, and early supporter of President Trump and his policy agenda. He is a principled conservative leader who has demonstrated integrity and excellence throughout his public career. He has already led the Department of Justice to correcting wrong-headed direction in many, many areas. While all conservatives are not in agreement with all his decisions, we respect that he has undertaken many reforms with very few colleagues in the Department who were similarly supportive of President Trump from the very early days. To lose his leadership would be disastrous for the president’s policy agenda.

Sessions, who represented Alabama in the Senate from 1997-2017, was announced by Trump in November as his choice for attorney general.

Trump may face significant political consequences if he fires Sessions over his frustration with the special counsel’s expanding Russia investigation, The Daily Signal previously reported.

Sessions recused himself from the Russia investigation in March, and Trump has since voiced frustration with Sessions’ recusal and the investigation process.

Why didn't A.G. Sessions replace Acting FBI Director Andrew McCabe, a Comey friend who was in charge of Clinton investigation but got….

…big dollars ($700,000) for his wife's political run from Hillary Clinton and her representatives. Drain the Swamp!

Trump has also called out Sessions for not investigating former Secretary of State Hillary Clinton’s use of a private email server during her time at the State Department.

So why aren't the Committees and investigators, and of course our beleaguered A.G., looking into Crooked Hillarys crimes & Russia relations?

Ukrainian efforts to sabotage Trump campaign – "quietly working to boost Clinton." So where is the investigation A.G. @seanhannity

The signers of the memo acknowledge Trump’s concern, but say it does not merit firing Sessions.

The president’s frustration with the distinctly partisan investigation into his family is understandable and appropriate. The opacity of the process, the politically motivated leaks, and the lack of a crime to investigate characterize this effort as little more than a specious attempt to discredit the president and his family members. President Trump is right to be outraged.

Though the president’s displeasure with the investigation may be understandable, a move to replace Jeff Sessions as attorney general would not be.

In an exclusive interview with Fox News’ Tucker Carlson that aired Thursday, Sessions said he stands by his decision.

“I’m confident I made the right decision, a decision that’s consistent for the rule of law,” Sessions said. “An attorney general who doesn’t follow the law isn’t very effective in leading the Department of Justice.”

Sessions was the first sitting senator to endorse Trump during the 2016 Republican presidential primaries.