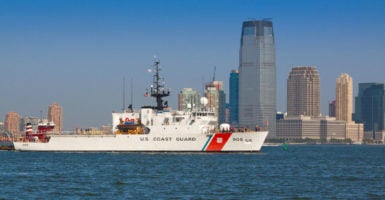 The Coast Guard only has enough assets to take on about 20 percent of known contraband imports. (Photo: iStock Photos)

Zachary Olden is a member of the Young Leaders Program at The Heritage Foundation.

The U.S. Coast Guard Cutter Waesche recently offloaded 18 tons of cocaine, valued at $554 million, after a multinational counternarcotic operation in the eastern Pacific.

This effort was part of Operation Martillo, an operation that has seized over 693 tons of cocaine since 2012. This is just one interdiction in what has already been a busy year for the Coast Guard.

In May, National Security Cutter Hamilton returned from conducting 20 individual interdictions in the eastern Pacific that yielded 18.5 tons of cocaine, worth $500 million.

In March, National Security Cutter James offloaded 16 tons of cocaine, worth $420 million, at Port Everglades, Florida—the result of combined efforts of a number of Coast Guard vessels and one Canadian vessel.

The Coast Guard seized $1.5 billion worth of cocaine in these three examples alone—and we are only halfway through 2017.

Yet the Coast Guard sails many cutters that have been in service for more than 50 years. To continue the important fight against drug trafficking, the Coast Guard needs to more rapidly modernize its fleet.

Unfortunately, in spite of these recent interdictions, roughly 400 metric tons of cocaine make it into the United States every year from Central and South America.

Coast Guard Commandant Adm. Paul Zukunft has repeatedly stated that the Coast Guard has intelligence on approximately 80 percent of U.S.-bound contraband, but only has enough assets to interdict 20 percent of those, “giving 60 percent of what we know, literally, a free pass.”

The legacy Hamilton-class cutter Sherman, which participated in the combined operation with the James in March, is nearly 50 years old. Built in 1968, the Sherman has already required major work to extend its service life, which originally expired in 1989—nearly 30 years ago.

Yet the Sherman’s story is a familiar one for the Coast Guard. In 2010, the Coast Guard responded to the earthquake disaster in Haiti, but 10 out of the 12 cutters that sailed were forced to return to port due to mechanical failures.

While Coast Guard officials have consistently urged Congress to provide more funding for their missions, they have historically requested below what is necessary.

They have argued for years that at least $1.5 billion—and more realistically, $2.5 billion—is needed to acquire new cutters, aircraft, and other systems to continue to meet demand, but almost every year the request doesn’t even approach the lower figure.

Compared to the more than $5 billion worth of cocaine the Coast Guard stopped from reaching American shores last year alone, neither figure seems like too much to ask.

Zukunft has argued that “just as the other [armed] services are challenged with readiness, we are no different. In fact, we’re operating a very, very old fleet today and one of our biggest challenges is modernizing the fleet to bring it up to 21st century standards.”

The Coast Guard needs a larger presence with modern cutters in order to better protect America’s waters from transnational organized crime and other threats.

Congress can support these efforts by continuing to better fund the Coast Guard’s primary acquisition needs, such as its next generation Offshore Patrol Cutter program, while also funding the service’s myriad other needs such as icebreakers, aviation assets, and proper maintenance and training funding.

If we continue to place high demands on the Coast Guard, we owe it to the sea service to provide what it needs to meet those demands.