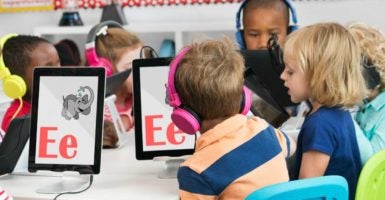 Children fresh off of learning the alphabet may have to learn the ABC's of gender identity under new guidelines for Minnesota K-12 schools. (Photo: Ariel Skelley Blend Images/Newscom)

It would seem to be common sense that schoolchildren fresh off of learning the alphabet should not have to learn the alphabet soup of growing gender pronouns sprung from the laboratories of college campuses.

But that is exactly what is happening in Minnesota.

On Wednesday, the Minnesota Department of Education advisory council voted to implement an LGBT “toolkit” for public and charter schools in the state.

Nor are these guidelines just intended for older students. Instead, they were created for children as young as those entering kindergarten.

The toolkit says the language surrounding gender identity issues is “evolving” and that “any student, including transgender and gender nonconforming students, may be heterosexual, gay, lesbian or bisexual.”

“Gender identity does not correlate with sexual orientation,” the report says.

Therefore, the toolkit offers a litany of suggestions for how teachers should address LGBT issues and be more “inclusive.”

One recommendation is to allow children to use the bathroom of their preferred gender identity.

And it doesn’t stop there. According to The Washington Free Beacon, the guidelines state that, in addition to using the child’s pronoun of choice, “teachers must call students by whatever name they choose to ensure that bullying does not occur.”

The students don’t even have to provide legal documentation or verification that their names have changed.

But what happens to a teacher who doesn’t use the correct name and pronoun to identify a student?

The guidelines say that the offending teacher could be found in violation of the Family Educational Rights and Privacy Act.

This is just a small part of the long list of recommendations.

They also suggest not using the term “boys and girls” in reference to the children, and instead using the gender-neutral “students” or “scholars.”

Homecoming and prom can also become problematic under the toolkit’s rubric, as gendered terms like “homecoming king” could be deemed offensive. The guidelines suggest using more neutral terms and phrases like “prom ambassadors” instead.

The report also urges students to adhere to these standards and for teachers to correct those who don’t use the advised language.

The toolkit is backed by a number of LGBT rights organizations, according to the Free Beacon, including “the Human Rights Campaign, the ACLU, the National Education Association, and the National Center for Lesbian Rights.”

But not everyone is happy about the ruling.

State Rep. Tim Miller, R-Prinsburg, said that no one from his district supports the toolkit, according to the Star Tribune, a Minneapolis newspaper.

“I do not see sensitivities to a 13-year-old Christian girl or a kindergarten boy who cannot possibly have a sexual orientation,” Miller said.

Though battlegrounds over gender identity have been all the rage on college campuses for quite some time, and have now hit the political mainstream, it is still shocking to apply them to children who are just beginning to understand the world around them.

Yet parents who don’t wish their children to be exposed to the standards have little choice in the matter. This is perhaps a perfect example of why school choice is such a pressing issue so that families have greater freedom to opt in or opt out of policies and belief systems that are right for them.