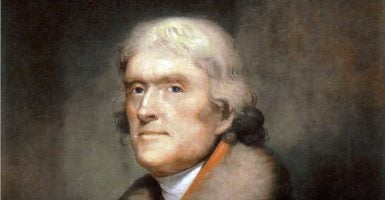 The latest in what has become an all too common crusade to wipe great American historical figures from places of honor and memory, the Louisiana Democratic Party has announced that it will change the name of its annual “Jefferson-Jackson” dinner to the bland and unremarkable True Blue Gala.

Louisiana Democrats joined many other state parties that have changed the name of the dinner, which was originally intended to celebrate two key figures in their party’s history—Presidents Thomas Jefferson and Andrew Jackson.

In the words of the Louisiana Democratic Party chairwoman, removing Jefferson and Jackson was done “to reflect the progress of the party and the changing times.”

Of course, both men were slaveholders, and therefore unacceptable to modern progressives despite whatever else they may have accomplished. Yet they were both, in their own way, great Americans who made invaluable contributions to our country.

This is not the first time these two men have come under fire from activists who want them purged. Jefferson has been attacked as unacceptable at the university he founded, and efforts have been made to remove Jackson’s towering statue in New Orleans.

A Blessing for ‘Unborn Millions of Men’

What is particularly astonishing about this historical slap in the face is the fact that no two men were more responsible for the state of Louisiana’s existence than Jefferson and Jackson.

It’s easy to forget that the United States—an unparalleled superpower extending from sea to shining sea—was not long ago a sparsely-populated backwater confined to the East Coast. It was the vision and statesmanship of early American leaders that led to the extension of the country westward.

Under the umbrella of the Constitution, the New World would, in the words of Jefferson, become a great “empire of liberty.”

In one of his most consequential acts as president, Jefferson took advantage of Napoleon’s need for money in his European wars to purchase just over 800,000 square miles of territory in the American West. This nearly doubled the size of the U.S.

Jefferson said that the Louisiana Purchase would be “replete with blessings to unborn millions of men.”

And so it was.

This masterstroke has paid dividends for over two centuries. By pushing out Old World empires and creating a haven for teeming hordes of self-governing people, America could rightfully claim to be truly the land of opportunity for the common man.

But treaties and lofty ideas are often lost in an international environment of predatory powers unless backed up with real strength.

Jefferson may have acquired the Louisiana territory, but Jackson was the blade who secured it.

Jackson once remarked that our liberties would indeed be in trouble if we only employed lawyers to defend the Constitution.

Gen. Andrew Jackson, a ferocious patriot and unrelenting believer in America’s destiny as the world’s greatest country, played an instrumental part in saving Louisiana and the country from conquest.

The British never recognized the American purchase of the Louisiana territory, and in the War of 1812 made serious efforts to invade and tear it away from the fragile young republic. It was truly a second war for independence.

The war culminated in the Battle of New Orleans, one of the most significant military victories in the history of the United States.

While the battle took place shortly after a peace treaty was signed, a defeat for American arms might have had terrible consequences.

Given the fact that they never recognized the American purchase, the British may have simply held the city that was the vital economic hub of the region. Also, Congress and Parliament had not ratified the treaty, so the British could have conceivably kept the war going.

But most importantly of all, the victory, which one newspaper called “almost a miracle,” gave pride to Americans who had often fared poorly against one of the world’s great military powers. America was not just a proposition, but resolute in its future as a free and independent country.

Jackson, and his diverse band of regular soldiers, militia, former pirates, and freed slaves, showed the world that they could defeat and annihilate a professional army from Europe. The courage and leadership he displayed at the battle ultimately led Jackson to the White House.

The End of History

It is sad and perhaps telling that Democrats no longer find it acceptable to pay tribute to these two important men. Both were once seen as champions of the common man, who through their strength and ideas defined and protected the seeds of American liberty.

Democrats once made room for men like Jefferson and Jackson in their pantheon and championed their virtues while sometimes glossing over their faults.

While it is reasonable to debate whether Americans should continue to maintain prominent memorials to Confederate leaders, the move against Jefferson and Jackson shows how this movement to create a more politically correct history makes little distinction between the men who broke up the union and those who fought to create and save it.

In that Civil War, which nearly ended the American experiment in liberty, it was those who embraced Jefferson’s immortal Declaration of Independence and Jackson’s militant unionism that saved the country and brought an end to the stain of slavery for good.

Though times and mores often change for better or worse, there is something deeply nihilistic about wiping from memory those who came before and meant so much. Jefferson and Jackson deserve better in Louisiana.

Frankly, every American owes them a debt of gratitude.