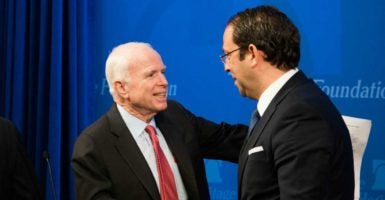 And the Tunisian leader has a backer in Sen. John McCain, R-Ariz., chairman of the Senate Armed Services Committee.

Warning that “no country can address challenges without support from the international community,” Tunisian Chief of Government Youssef Chahed used a speech Tuesday at The Heritage Foundation to encourage the United States to further both its own security and the flourishing of the Middle East by continuing to provide “valuable assistance” to Tunisia.

President Donald Trump’s fiscal 2018 budget would slash aid to Tunisia from $177 million a year to $54 million a year, a move that McCain, who spoke after Chahed, indicted as “misguided and dangerous.”

The partnership between Tunisia and the United States stretches back 220 years to 1797, when President John Adams and the Tunisian king signed a treaty of peace and friendship.

After Tunisia achieved independence from France in 1956, the U.S. was one of the first countries to recognize its sovereignty.

The “friendship of mutual respect and shared values,” as Chahed described it, involves dedication to similar principles. Chahed, who holds a doctorate in agricultural economics, emphasized Tunisia’s historical dedication to tolerance.

Although a Muslim nation, Chahed said, Tunisia is a longtime home to Jewish communities. And St. Augustine, born near the modern border, spent time in ancient Tunisian cities.

He characterized the 2011 Tunisian revolution as a “peaceful and civilized” continuation of ancestral devotion to  pluralistic society.

The revolt sparked pro-democracy movements around the Middle East in what came to be called the Arab Spring. While other Arab countries such as Egypt and Syria returned to authoritarianism and instability, Tunisia continues to embrace the liberal order, Chahed said.

The “full-fledged democracy” now marking Tunisia is rooted, Chahed said, in freedom of speech, freedom of belief, and freedom of entrepreneurship. He cited civil institutions as key to fostering dialogue and stabilizing the country.

Yet Tunisia’s liberal order faces challenges from economic turmoil, corruption, and terrorism. As chief of government, Chahed has implemented anti-corruption measures, which he called among the region’s most comprehensive and designed to advance economic growth and employ recent graduates.

Read more about Tunisia Economy.
See more from the 2017 Index.

The index places Tunisia at 123 out of 180 nations ranked for overall economic freedom.

Despite these concerns, Heritage’s senior vice president for research and the index’s founding editor, Kim Holmes, praised the nation’s progress, saying: “Tunisia remains committed to maintaining a free and equitable democracy for all its people.”

Regional security has overtaken development as a state priority. Islamist terrorist attacks in the region and in Europe leave Tunisia with no choice but “to fill the gap and stand up for our style of democracy,” Chahed said.

Under Chahed, the Tunisian government has allocated 17 percent of its budget to security—“a huge sacrifice,” he said—in a bid to cut off financial resources for terrorists and implement programs to hinder radicalization of young Tunisians.

Fulfilling such goals, Chahed said, requires continued U.S. support. In response to the proposed cuts, he cautioned that U.S. security interests hinge on Tunisia’s ability to successfully fight the Islamic State, or ISIS, and bolster its own democracy.

Chahed said he anticipates Tunisia will stop ISIS, which has committed multiple attacks on Tunisian soil and frequently drafts Tunisian citizens. He said his nation will serve as a “model of democratic transition” that can prompt other countries such as Libya and Egypt to institute secular values and civil structures.

>>> Video:  McCain on Trump: ‘Disregard the Tweets, Look at What He Does‘

“The world needs a democratic and prosperous Tunisia,” McCain said. “Tunisia is struggling but winning, when many other places are struggling and losing.”

The Arizona senator and 2008 Republican presidential nominee attributed that success to Chahed’s leadership and the nation’s translation of freedom to what he called good governance.

Watch the complete remarks by Chahed and McCain here.

This report has been modified to flesh out St. Augustine’s connection with Tunisia.