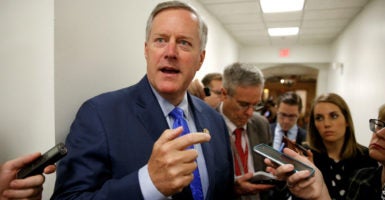 The Senate’s Republican leadership released a revised health care bill Thursday afternoon, a move welcomed by House conservatives even as they were reluctant to comment before digesting it.

“We are going to withhold judgment,” Rep. Mark Meadows, chairman of the House Freedom Caucus, said earlier in the day during the monthly Conversations With Conservatives event on Capitol Hill, but emphasized that the major goal is to drive down skyrocketing health insurance premiums under Obamacare.

The bottom line is this: That has been our No. 1 thing from Day One. We’ve got to bring premiums down, and hopefully we will get there.

Lee and Cruz were among senators who opposed the original draft released June 22 and announced an amendment they call the Consumer Freedom Option. It would allow insurance companies to sell any health coverage plan they wish as long as they provide one plan that satisfies the mandates of Obamacare.

The draft includes a provision similar to the Cruz-Lee amendment that would “set up a fund that would make payments to insurers to help cover the cost of high-risk, disproportionately expensive customers,” the Examiner reported.

Just FYI – The Cruz-Lee Amendment has not been added to BCRA. Something based on it has, but I have not seen it or agreed to it. 1/2

I am withholding judgment and look forward to reading it. 2/2

Conn Carroll, Lee’s communication’s director, told The Daily Signal in an email that the Utah Republican was “undecided” on the new draft.

Joining Meadows at the monthly meeting of conservative Republicans with reporters who cover Congress included Reps. Andy Biggs and Paul Gosar of Arizona, Dave Brat and Morgan Griffith of Virginia, Matt Gaetz of Florida, Ron Estes of Kansas, and Thomas Massie of Kentucky.

“We want to make sure that the patient is empowered and that they have a marketplace that is rebuilding,” Gosar said. “Take it from a dentist, this isn’t a marketplace.”

In the upper chamber, Sen. Thom Tillis, R-N.C., said he is evaluating the bill.

“I look forward to carefully reviewing the changes made to the Better Care Act,” Tillis said in a prepared statement. “From what I’ve already seen, major improvements have been made, including a significantly bigger investment to combat and treat opioid addiction, and more funding to help control the rising costs of premiums for individuals and families.”

I cannot imagine that Congress would dare to leave Washington without a beautiful new HealthCare bill fully approved and ready to go!

Robert Moffit, a senior fellow in health policy at The Heritage Foundation, said in a statement provided to The Daily Signal that more work has to be done.

“Like the House and prior Senate drafts, the latest health bill released today represents a solid first step toward undoing the damage caused by Obamacare to the individual and small-group insurance markets,” Moffit said. “It is disappointing that the bill misses the chance to repeal all of Obamacare, but overall the legislation is better than the status quo of Obamacare.”