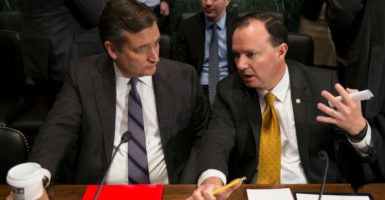 Four conservative senators promptly said they can’t support the draft of a health care bill released Thursday by the Senate’s Republican leadership as a cure for Obamacare.

“Currently, for a variety of reasons, we are not ready to vote for this bill, but we are open to negotiation and obtaining more information before it is brought to the floor,” Sens. Rand Paul of Kentucky, Ted Cruz of Texas, Ron Johnson of Wisconsin, and Mike Lee of Utah wrote in a formal statement.

The four Republicans said they oppose the Senate leadership plan, called the ‘‘Better Care Reconciliation Act of 2017,” because it does not fully repeal and replace Obamacare.

I am one of four Republicans not ready to vote for #HealthcareBill: https://t.co/Iys8FFFq7a @SenTedCruz @SenRonJohnson @SenRandPauI

“There are provisions in this draft that represent an improvement to our current health care system, but it does not appear this draft as written will accomplish the most important promise that we made to Americans: to repeal Obamacare and lower their health care costs,” the four senators wrote.

The Senate plan would end mandates for health insurance, including the Obamacare mandate forcing consumers to buy insurance or pay a penalty. It also would phase out the Medicaid expansion under Obamacare over three years, Axios reported.

>>> Commentary: The Senate Bill Misses a Key Opportunity. Here’s What Should Be Done.

The eventual support of Cruz, Johnson, Lee, and Paul is crucial because Republicans have a 52-46 majority over Democrats in the Senate. Two independents caucus with the Democrats.

Republicans will need at least 51 votes to pass a health care bill under a procedure known as budget reconciliation, with Vice President Mike Pence empowered to break a tie.

President Donald Trump said Wednesday night in a speech in Cedar Rapids, Iowa, that it would be “so easy and so beautiful” if some Democrats would judge the final plan on its merits.

One major difference in form in the Senate plan compared with the House-passed version of the health care bill is the absence of the so-called MacArthur amendment.

The MacArthur amendment, negotiated in the House to resolve differences between conservative and centrist Republicans, gives states “the ability to repeal cost-driving aspects of Obamacare” left in place in the original version of the American Health Care Act, the House Freedom Caucus said in a formal statement.

Section 1332 of Obamacare allows states to apply to the secretary of the Department of Health and Human Services (HHS) and get a ‘waiver’ from 11 statutory provisions, including the individual and employer mandates, the actuarial value mandate that determines coverage levels, the federal rules governing the definition of individual and small group coverage, and the federal essential health benefit requirements.

How much flexibility states will have under the Section 1332 waiver is an important question, some observers say.

In a statement provided to The Daily Signal, Moffit, who was traveling, said he is not sure how the Senate’s proposed legislation would repeal and replace Obamacare.

Overall, the Senate bill is better than Obamacare because it contains provisions to reduce insurance premiums and promote access to insurance in the short run; cut taxes; and provide major Medicaid reform that will help refocus the program to those most in need.

It is still an open question, however, whether the bill will repair enough of the damage caused by Obamacare so that the middle-class self-employed will be able to find affordable health insurance in five years.

The legislation also would retain for two years Obamacare’s cost-sharing subsidies, which were created to reduce out-of-pocket costs for low-income patients who purchase silver-level insurance plans through Obamacare’s exchanges, as The Daily Signal previously reported.

Senate Democrats, some of whom Trump appears to be trying to shame publicly into negotiating, are wary of the draft. Minority Leader Chuck Schumer, D-N.Y., was among them, tweeting:

Senate Republican's #TrumpCare bill is as bad as we feared. #ReadTheBill here: https://t.co/WIFcgbZwDg

The House passed its revised version of  Republicans’ health care bill May 4 by a razor-thin vote of 217-213.

Senate Republicans are using the tool called budget reconciliation to pass a bill because it requires only 51 votes to clear the Senate, rather than 60 votes to end debate and proceed to a floor vote.

#Obamacare has been a disaster from day one. It's time that Americans received #BetterCare. https://t.co/M1mEJGTZW6

Democrats passed the Obamacare legislation without a single Republican vote, and President Barack Obama signed it into law in March 2010.

The draft of the Senate bill would defund Planned Parenthood for a year, a promise that House Speaker Paul Ryan, R-Wis., made in March.

Here's the provision defunding Planned Parenthood for a year. pic.twitter.com/xCEEL7aSqX

Senate Republicans’ draft also specifies that tax credits could not be used to pay for abortions.

Rep. Andy Biggs, R-Ariz., a member of the House Freedom Caucus, voiced concern in a statement about the Senate draft:

I am extremely disappointed by the lack of resolve from Congress to repeal Obamacare—most recently, with the U.S. Senate’s legislation. The American people demanded a full repeal. Now, the 115th Congress is dangerously close to abandoning our promise and opportunity to completely repeal Obamacare, remove government from the health care industry, permanently defund Planned Parenthood, and give Americans their long-awaited relief from overwhelming premiums.

Sen. James Lankford, R-Okla., another conservative senator, said he is studying the draft and hasn’t made up his mind.

“I’m going through it,” Lankford said in an interview with CNN. “I have a lot of questions still, a lot of things we have talked about. It’s 142 pages of text, but there’s things piled into that text that we’ve got to decipher. Put me down as a solid undecided.”