How Fossil Fuels Will Help Us Confront Climate Change 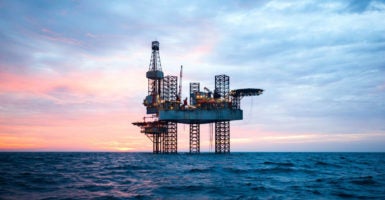 Skeptics of the climate change narrative seek to grow and develop technology as fast as possible in order to be well-positioned for future environmental challenges. (Photo: iStock Photos)

The debate over climate change policy pits two competing visions of the future against each other.

On the one hand are the “true believers,” who see in global warming an existential threat to humanity. They want to slow the rise in temperature as soon as possible, and as much as possible.

Their policy prescriptions focus on the curtailment, or even elimination, of the use of fossil fuels, no matter the costs in terms of slower economic growth and increased poverty.

The “skeptics,” on the other hand, view global warming as a potentially serious issue. It might cause problems in the future, but the impacts cannot be determined now with any degree of certainty.

Instead of attempting to forestall future warming, they focus on policies that will build societal wealth as well as scientific and technological capacity by the most efficient means available. Given the existing state of technology, this includes the use of abundant fossil fuels to promote rapid economic growth.

The goal of the skeptics is to position society to deal effectively in the future with whatever issues may arise from global warming as they actually occur.

One possible version of the skeptics’ vision of a high-wealth, high-energy society was on vivid display last week in Dubai, where The Heritage Foundation was promoting the Index of Economic Freedom at the annual conference of the Academy of International Business.

The United Arab Emirates is a group of seven semi-independent emirates on the shores of the Persian Gulf, of which Dubai is the largest.

When the emirates gained independence in 1971, the population was about 275,000. Now it is about 9.3 million, making the UAE one of the fastest-growing countries in the world.

Economic growth has kept pace with population growth in the UAE, and the per capita gross domestic product is among the highest in the world at about $67,000 (based on purchasing power parity).

The UAE is an oil-producing state, and the economy is built on a foundation of abundant and cheap fossil fuels.

Unlike many other oil-producing states, however, where centralized control has hampered diversification and locked society into dependence on export revenue, the UAE government has promoted economic freedom and openness, rising to eighth place in the world in The Heritage Foundation index rankings and first place among the countries of the Middle East and North Africa.

Modern Dubai rises from the desert like a vision of Tomorrowland. Skyscrapers vie with one another for the most inventive architectural design, and the tallest building in the world, the Burj Khalifa, towers over them all.

This is where the relevance to the climate change debate comes in.

The current average world temperature is about 58 degrees. The true believers in climate change are predicting global catastrophe if that temperature rises by a worst-case estimate of 7 degrees Fahrenheit. That would bring the world average temperature to about 65 degrees.

Dubai, today, is doing quite well at an average temperature 35 degrees higher.

Obviously, Dubai is on the cutting edge of technology and prosperity as a result of its oil endowment and government policies that promote economic freedom and growth.

Not every country has oil, but in a globalized market, cheap fossil fuels are available everywhere to spur rapid growth and technological change.

Skeptics instead want to grow and develop as fast as possible now in order to be better positioned to deal with whatever future challenges may come. The success of modern-day Dubai shows at least that the skeptics’ vision is plausible.

The true believers, on the other hand, have no examples or evidence to demonstrate that their policies of sacrifice can produce a better world for future generations.