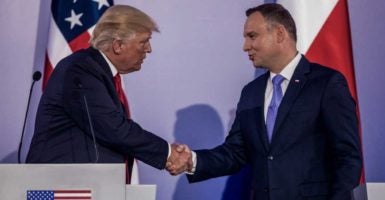 The reception for President Donald Trump received in two European countries during his second foreign trip couldn’t be more different.

In Poland, Trump was greeted by cheering crowds as he stood in the sunshine in Krasinski Square. This is where Pope John Paul II made an earthshaking address in 1979 as the Cold War entered its final phase.

Trump’s speech was superbly crafted and rich in historical context, and it was firm in commitment to the freedom and prosperity of all of Europe. Of course, it was particularly tailored to Poland, a country with which the United States has deep and warm ties.

As a bulwark against the inroads of Russian propaganda and influence peddling, which the Kremlin is targeting at the European media and political systems, Trump’s presence in Poland and his stated commitments were public diplomacy of the highest order.

What Trump said, every Pole could understand. Trump spoke of threats, from Islam and from Russia, and of the will of our common civilization to survive.

This continent no longer confronts the specter of communism. But today we’re in the West, and we have to say there are dire threats to our security and to our way of life. You see what’s happening out there. They are threats. We will confront them. We will win. But they are threats.

We urge Russia to cease its destabilizing activities in Ukraine and elsewhere, and its support for hostile regimes—including Syria and Iran—and to instead join the community of responsible nations in our fight against common enemies and in defense of civilization itself.

Our own fight for the West does not begin on the battlefield—it begins with our minds, our wills, and our souls. Today, the ties that unite our civilization are no less vital, and demand no less defense, than that bare shred of land on which the hope of Poland once totally rested. Our freedom, our civilization, and our survival depend on these bonds of history, culture, and memory.

The speech was reminiscent of President Ronald Reagan’s speech in Berlin 30 years ago, in which he challenged the Soviet leader Mikhail Gorbachev, “Mr. Gorbachev, tear down this wall.”

The speechwriter who crafted it should get credit. But as in the case of Reagan, Trump deserves the recognition for the courage to deliver a strong and direct challenge to the forces trying to attack and undermine the civilization, the political and ethical system, and the security of the countries of the West.

In a sense, the speech was a harkening back to the pre-Obama past, and as such, it was incredibly refreshing.

Meanwhile, next door in Germany, which is hosting the G-20 summit in Hamburg on Friday, crowds of demonstrators were preparing to greet Trump with “Welcome to Hell” signs.

Though the meaning is unclear, it could mean that they were hoping German Chancellor Angela Merkel would give Trump “hell” for having pulled the United States out of the inequitable Paris climate agreement, which even President Barack Obama knew would not receive support in the U.S. Congress and therefore never put it up for a vote.

Interestingly, an attempt to embarrass the U.S. president by a vote of support for the Paris Agreement—intended to demonstrate U.S. isolation—had to be abandoned because other countries have deep reservations, too, and would not participate in the charade.

According to the German media, the Hamburg hotels put up “all occupied signs,” denying the U.S. president accommodation, though the U.S. media blamed the White House for not having made reservations in time.

And while Trump was in Poland affirming U.S. commitments and historic ties to Europe, Merkel was telling the German people that Germany can “no longer rely on America.”

The tale of two Europes could not be clearer—and it is pretty obvious on which side the United States’ best allies are to be found.