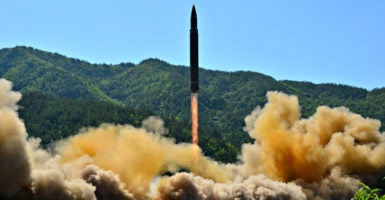 President Donald Trump may have no good options in responding to North Korea’s successful missile launch July 4, experts say, but a military strike is likely the worst while more intense sanctions and pressure on China probably are the most feasible.

Still, some authorities on North Korea have unconventional views for dealing with Kim Jong Un’s communist regime, such as interdicting North Korean vessels at sea or a full-scale blockade, similar to what the U.S. carried out against Cuba during the missile crisis in 1962.

Another idea: Trump should cut a direct deal with the North Korean government, acting on what he calls his gift of making deals.

North Korea’s government says its intercontinental ballistic missile could carry a large nuclear warhead and reach as far as Alaska or the Pacific Northwest.

North Korean state media claimed the Hwasong-14 missile flew 580 miles, reaching an altitude of 1,741 miles in 39 minutes of flight. Some analysts reportedly said the flight details suggest the missile had a range of more than 4,970 miles, which would put parts of the continental U.S. in reach.

Striking North Korea in some capacity would be the last option, experts who spoke with The Daily Signal agreed, fearing escalation could lead to hundreds of thousands, even millions, of casualties.

“Military action is not really a good option. Some have called for a limited strike, but North Korea’s response might not be limited,” Anthony Ruggiero, a senior fellow at the Foundation for Defense of Democracies, told The Daily Signal.

Three military options exist, Fred Fleitz, senior vice president for policy and programs at the Center for Security Policy, told The Daily Signal. But, Fleitz said, everything first should be done to avoid direct conflict.

First, America’s missile defense systems in Asia could shoot down North Korea’s next tested missile, Fleitz said. The second option would be a naval blockade. If neither worked, the U.S. could launch an airstrike on North Korea’s nuclear sites.

“The problem is, if you destroy nuclear reactor sites, you release a lot of radiation in the region,” Fleitz said.

A blockade is a viable optional, said Howard Stoffer, a former State Department Foreign Service official who also worked on the staff of the United Nations Security Council.

“I have suggested getting Russia and China on board for an embargo or a quarantine,” Stoffer told The Daily Signal. “Nothing goes to North Korea except for food and medicine. We could even restrict fuel. If they threaten to fire on Seoul, we’d have to see who’s bluffing.”

However, Stoffer said, a quarantine would come only after more major diplomatic measures.

China and Russia have been the roadblocks to strong sanctions on the North Korean regime from the U.N. Security Council, which convened Wednesday in response to the missile test.

Last year, China and Russia got behind a plan for the U.S. to cancel military exercises in South Korea in exchange for a North Korean freeze on missile tests and nuclear bomb development, noted Stoffer, now a professor at the University of New Haven.

“If North Korea continues testing, the U.S. can easily go back to Russia and China and say, ‘We tried it your way.’ Then you move to a harder measure, as a two-stage process,” Stoffer said.

“This could make Donald Trump look good. China and Russia would be on board. If North Korea rejects the offer, the U.S. will have tried everything,” Stoffer said.

However, diplomacy isn’t likely to work, said Bruce Klingner, an expert on North Korea who is senior research fellow for Northeast Asia at The Heritage Foundation.

Some have now adopted the view that we should try something new, like diplomacy. Well, my meetings with North Korean officials last month in Europe indicated that—as has been said in other private meetings with North Koreans—denuclearization is totally off the table. There is nothing the U.S. or South Korea could offer to abandon its arsenal. And we’ve had eight international agreements that failed to prevent them from acquiring nuclear weapons or give up the weapons they promised never to build.

The U.S. has been engaged in what amounts to “timid incrementalism” when it comes to sanctions on North Korea and more secondary sanctions related to China, Klingner said.

“There are a lot of misperceptions that sanctions have been done and have failed,” Klingner said. “The reality is that the U.S. has been pulling its punches. When President Obama said North Korea is the most heavily sanctioned, most cut-off nation on earth, he was wrong. The U.S. the EU, and the U.N. applied pressure to Iran that [they] never did to North Korea. Last year was the first year the U.S. had cumulatively sanctioned as many North Korean entities as the U.S. had sanctioned those from Zimbabwe.”

Last week, Treasury Secretary Steven Mnuchin announced the U.S. would sanction the Bank of Dandong, a Chinese bank that does business with North Korea, blocking it from access to the U.S. financial system.

“We know there are banks and businesses that are engaged with North Korea’s prohibited nuclear programs, but we haven’t enforced U.S. law against them, for whatever reason,” said Klingner, who worked for 20 years for the Central Intelligence Agency and the Defense Intelligence Agency.

Like going after nodes of a criminal organization, if you take out Al Capone’s lieutenants, bagmen, and couriers, then you send signals to the rest of the network, but you’re also undermining its effectiveness. People say, ‘Will China go along with that?’ They don’t have to go along with that.

We can use our own laws against these entities because they are using the U.S. financial system. We are enforcing our laws on our soil. So, I’m hoping the [Trump] administration sanctioning of that Chinese bank and two or three other entities is really just the tip of the iceberg.

The U.S. has to distinguish between diplomacy and law enforcement and just point out to Beijing that we are going after organizations and entities operating in an illegal manner. Why would you be resistant to us enforcing our laws? Even if we don’t feel the Chinese government has been involved, if it is resistant to us enforcing our laws, one has to raise questions about whether they too are complicit.

The United States doesn’t have to lean on China for the U.N. to take action, or even rely on the U.N., Fleitz said.

The U.S. and its allies can interdict and stop North Korean vessels under the Proliferation Security Initiative, a global effort endorsed by more than 100 countries aimed at stopping trafficking of weapons, delivery systems, or related materials to state and nonstate proliferators.

“Conflict with North Korea is inevitable, either deliberately or accidentally,” Fleitz said. “So we need to do as much as possible to delay or prevent this. That means working outside the United Nations. We can interdict and stop North Korean ships under the Proliferation Security Initiative. … North Korea is earning cash [by] selling missile technology to Iran, carrying and selling counterfeit goods and American currency.”

“A group of likeminded nations would agree to interdict every North Korean vessel,” he said of this option. “China wouldn’t like it, but other countries would be on board.”