Coal in America Is Already Clean. Why ‘Clean Coal’ Is a Boondoggle That Needs to End. 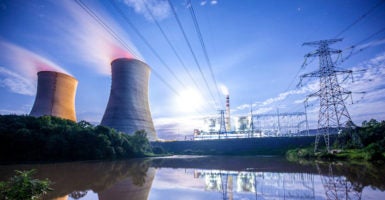 The Obama administration touted carbon capture and sequestration technology, giving it billions in taxpayer subsidies that have not produced a workable product. (Photo: iStock Photos)

A power plant once heralded by the Obama administration as the poster child for clean coal is now on its deathbed.

The plant hemorrhaged billions in cost overruns despite being heavily subsidized by the federal government. Mississippi regulators are ready to pull the plug.

Southern Company’s Kemper County Energy Facility had intended to use carbon capture and sequestration technology to gasify the coal, but instead, the plant has been running on natural gas since 2014.

The Mississippi Public Service Commission has unanimously passed a motion that the plant should only use natural gas moving forward.

The Obama administration touted the Kemper plant as a leading example of how a power plant would operate under climate change regulations for new power plants.

The regulations set new standards for carbon emissions that power plants could only meet by using carbon capture and sequestration technology. This would effectively have banned new coal-fired power plants from being built.

But carbon capture and sequestration technology poses its own obstacles. There is in fact no credible basis to state that it is adequately demonstrated proven technology, since no large-scale power plant in the United States currently uses it.

Yet it seems as though politicians and regulators in Washington may have watched “Field of Dreams” one too many times.

Adapting from the famous line, “If you build it, they will come,” the Environmental Protection Agency and Department of Energy urged with regard to coal, “If you regulate and subsidize, the technology will come.”

In fact, former EPA Administrator Gina McCarthy claimed, “Rather than killing future coal, [the new rules] actually [set] out a certain pathway forward for coal to continue to be part of a diverse mix in this country.”

In the EPA’s regulatory impact analysis for the proposed New Source Performance Standards for new power plants, the EPA wrote:

The EPA intends this rule to send a clear signal about the current and future status of [carbon capture and sequestration] technology. Identifying partial implementation of [this] technology as the best system of emission reductions for coal-fired power plants promotes further development of [carbon capture and sequestration], which is important for long-term CO2 emission reductions.

From the subsidy side of the equation, former Energy Secretary Ernest Moniz chimed in, stating that “[s]ince the beginning of the administration, [the Department of Energay] has invested around $6 billion to advance clean coal technologies—particularly in carbon capture, utilization, and storage—that substantially reduce carbon emissions.”

Years and billions of dollars in cost overruns later, the fact remains that carbon capture and sequestration is a taxpayer-funded boondoggle. Southern Company’s Kemper plant in Mississippi, a stimulus handout recipient, has been plagued with delays and cost overruns.

One issue at hand is the definition of so-called clean coal.

Many environmental activist organizations believe clean coal is oxymoronic. That’s simply not the case. Regulations required coal-fired power plants to install scrubbers that significantly reduce the pollutants like soot and chemicals that have adverse public health impacts and environmental costs.

Technological improvements have improved efficiencies of power plants, reducing emissions. Overall, the pollutants known to cause harm to public health and the environment have been declining for decades.

The definition of clean coal commonly used today includes coal without any carbon dioxide emissions. Carbon dioxide is a colorless, odorless, nontoxic gas that does not have any direct human health impacts.

Our coal-fired generating units in the U.S. without carbon and capture sequestration do not run like those in China. Coal in America is already clean.

The failure of the Kemper plant should raise a giant red flag for policymakers, regulators, and White House officials. Appropriators should not throw good money after bad. It’s time to end carbon and capture sequestration programs within the Department of Energy.

The EPA should roll back Obama-era regulations for new power plants and emphasize that carbon and capture sequestration technology should be used only if companies believe it is in their economic interest to do so.

But that doesn’t mean policymakers can dream up ideas and use taxpayer-funded subsidies and its regulatory power to bring that wishful thinking to fruition. It is a waste of money and diverts resources away from other competitive uses.

Like Mississippi’s Public Service Commission, Washington should pull the plug on clean coal.