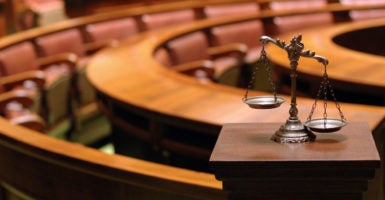 Leading Democrats have filed two lawsuits against President Donald Trump based on a misuse of the Constitution's Emoluments Clause. (Photo: iStock Photos)

The claims they raise are substantially similar to those made in a separate lawsuit brought by the advocacy group Citizens for Responsibility and Ethics in Washington (CREW), which was filed against Trump in January.

All three groups of plaintiffs claim Trump is violating the Foreign Emoluments Clause and the Presidential Compensation Clause of the U.S. Constitution because, like many presidents before him, he owns assets that continue to earn profits while he is president.

But these “emoluments” lawsuits have another commonality: They all advance the campaign of liberal groups and the Democrat Party to “resist” and ultimately impeach the president.

Two points make that clear: the meaning of the word emoluments as it appears in the U.S. Constitution, and the origin of the present “emoluments” debate.

The Foreign Emoluments Clause of the Constitution (Article I, Section 9, Clause 8) provides that:

… no person holding any office of profit or trust under [the United States], shall, without the consent of the Congress, accept of any present, emolument, office, or title, of any kind whatever, from any king, prince, or foreign state.

“The Heritage Guide to the Constitution” explains that the framers adopted this language to keep U.S. diplomats who were serving abroad and other federal officers from the corrupting payola that European state officials historically dealt to foreign ministers.

The President shall, at stated Times, receive for his Services, a Compensation, … and he shall not receive within that Period any other Emolument from the United States, or any of them.

The Heritage Foundation guide further explains that the framers sought to prevent improper financial arrangements between the Congress or any state(s) and the president, made to corrupt his official government conduct.

So what exactly is an “emolument”?

The Democratic plaintiffs assert that “emolument” means whatever they say it means—namely, “anything of value.”

By contrast, the Oxford Dictionary defines an emolument as a “salary, fee, or profit from employment or office”—derived from the Latin term “emolere,” meaning “grind up,” and “emolumentum,” meaning “payment to a miller for grinding corn.”

From the White House, President George Washington oversaw his own extensive business operations that included transactions with foreign states (and a gristmill). Washington evidently saw the Foreign Emoluments Clause as not applying to his business dealings.

The Justice Department has argued in the course of the emoluments litigation that several other Founding Fathers and two-term presidents—Thomas Jefferson, James Madison, and James Monroe—apparently did the same.

Neither Congress nor the public sought to sue or impeach Washington or any other president for improper “emoluments.”

More recently, President Barack Obama, like President John F. Kennedy before him, profited from worldwide book sales as a sitting president. Surely some foreign state agents bought these books to get a better understanding of the president. For their definition of “emoluments,” the Democrats attempt to rewrite history, contort the U.S. Constitution, and rely on blatant double standards.

The Justice Department, meanwhile, persuasively argues in opposition to one of the three lawsuits: “Neither the text nor the history of the clauses shows that they were intended to reach benefits arising from a president’s private business pursuits having nothing to do with his office or personal service to a foreign power.”

Rather, the Justice Department argues, the constitutional term “emoluments” applies to compensation received for services rendered pursuant to government office.

The origins of this “emoluments” debate reveals that it is at least in part another form of the Democrats’ broad opposition to the president.

Warren’s Crusade to Impeach the President

The “emoluments” debate began on Dec. 15, 2016, when Sen. Elizabeth Warren, D-Mass., and four other Democratic senators proposed a bill that would lay the groundwork to impeach the president.

The bill would set two mandates:

In short, the bill’s co-sponsors want Trump to either ditch “anything of value” or be impeached. Sen. Elizabeth Warren, D-Mass., has become a leading spokesperson for the left wing of the Democratic Party and a critic of the president’s agenda. (Photo: Jeff Malet Photography/Newscom)

Since then, Democrats have filed three lawsuits against the president in federal courts, as mentioned earlier:

Each lawsuit alleges violations of the Foreign Emoluments Clause and the Presidential Compensation Clause, and each asks for the same two forms of relief: 1) for the court to declare that their controversial and unfounded interpretation of the Constitution is the supreme law of the land, and that Trump is currently violating the emoluments clauses; and 2) to order the president to stop violating the emoluments clauses.

The lawsuits are, either by happenstance or design, built to further Warren’s quest for impeachment.

Today, as with the Washington and Obama administrations, the people elected the president knowing that he stood to profit from private business unrelated to his official conduct and constitutional duty to “take care that the laws be faithfully executed.”

While it seems obvious that the Democrats have suffered no real injury to justify their lawsuits, they do risk injuring the Constitution by seeking to jam their politics into it.