Democrats’ Suit Claims Constitution Means One Thing for Obama, but Another for Trump 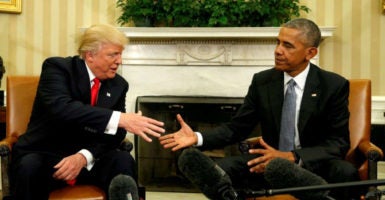 The Justice Department filed a court brief Friday in support of its motion to dismiss a partisan group’s lawsuit against President Donald Trump for having been a businessman.

In the lawsuit, Citizens for Responsibility and Ethics in Washington, or CREW, alleges that Trump violates the Foreign Emoluments Clause of the Constitution whenever any entity of the Trump Organization does any business with any foreign agent.

The Justice Department argues that, for a variety of reasons, Trump does not. It also argues that the court cannot hear the case regardless, because CREW lacks standing to bring the lawsuit.

The attorneys general of Maryland and the District of Columbia, both Democrats, went to court Monday with claims similar to CREW’s.

The Foreign Emoluments Clause, the main provision of the Constitution at issue, reads:

[N]o Person holding any Office of Profit or Trust under [the United States] shall, without the Consent of the Congress, accept of any present, Emolument, Office, or Title, of any kind whatever, from any King, Prince, or foreign State.

As explained in The Heritage Guide to the Constitution, the framers adopted this clause to prevent the corruption of U.S. officeholders, particularly foreign ministers, through the receipt of bribes and other improper benefits from foreign officials—not to bar the president from having private business interests.

Now that Trump is president, CREW argues, many business activities of the Trump Organization that had been lawful are now unconstitutional.

Yet President Barack Obama earned over $10 million from international book sales while president, and CREW never sued him for violating the Constitution. And one of the lawyers suing Trump, Norman Eisen, should have been acutely aware of this, since he was special counsel for ethics and government reform under Obama.

The different standard for Obama and Trump is the tip of an iceberg of political bias in this lawsuit.

Justice Department lawyers have emphasized how CREW’s claims clash with the framers’ understanding of the Constitution.

“At the time of the nation’s founding,” reads the government’s brief, “government officials were not given generous compensations, and many federal officials were employed with the understanding that they would continue to have income from private pursuits.” For example:

—George Washington (1789-1797) “left his nephew in charge of his highly successful business, required ‘weekly reports’ from his farm managers at Mount Vernon, and responded with detailed instructions. From his presidential office, he wrote business plans, including those for his gristmill, from which he exported flour and cornmeal to ‘England, Portugal, and the island of Jamaica.’”

—Thomas Jefferson (1801-1809) “maintained his farm and nail factory at Monticello and exported his tobacco crop to Great Britain.”

—James Monroe (1817-1825) “grew timber, tobacco, and grain” on his 3,500- acre Highland plantation. “While Madison’s and Monroe’s farm records apparently have not survived, the export of farm products such as tobacco to England and elsewhere had been common since colonial times.”

If the framers had sought to forbid the president from having any interest in any “private commercial transactions” with any “foreign, federal, or state instrumentality, surely someone would have raised concerns about whether foreign governments or government-owned corporations may have been among the customers of the farm and other products regularly exported by early presidents.”

According to the Justice Department brief, “there is no evidence of these presidents taking any steps to ensure that they were not transacting business with a foreign or domestic government instrumentality.”

Washington, Jefferson, Madison, and Monroe were all two-term presidents. If Congress or the public believed their practices were unconstitutional, any one of them could have been impeached or voted out of office. Instead, they became some of our most celebrated leaders.

By giving the Obama administration a pass and ignoring the practices of early administrations, including that of George Washington, the lawsuit would set a dangerous double standard: The Constitution means one thing for politically preferred parties, and another for political foes.

The Justice Department’s objective treatment of historical evidence reveals the lawsuit to be much more about political opposition than faithful constitutional interpretation.

Yet others are joining this particular campaign against the president.

Their suit takes CREW’s claims and adds allegations that Trump Organization business activities violate the Constitution’s Presidential Compensation Clause. That clause states that the president “shall … receive for his Services, a Compensation, … and he shall not receive within that Period any other Emolument from the United States, or any of them.”

That provision is designed to prevent any states or Congress from holding undue influence over the president through financial incentives.

Several Democratic senators and House members have indicated they plan to jump on the “emoluments” bandwagon by filing their own lawsuit against Trump.

Far from demonstrating the merits of CREW’s claims, however, the actions of these elected Democrats show much of the foreign emoluments debate for what it is (as Heritage Foundation colleague Hans von Spakovsky and I wrote  in January):

CREW’s lawsuit is deeply flawed. It flouts relevant facts and law and pushes an interpretation that reflects more selective moral outrage than sound legal theory. More than anything else, it seems to be the start of a PR campaign against President Trump—a warning shot that signals more harassing lawsuits to come.

The Justice Department’s 70-page brief is a tour de force, and ought to be the end of the matter. These lawsuits, including the one yet to be filed, border on the frivolous and are a waste of time and energy.

But then again, diverting the president’s time and energy may well be the point.