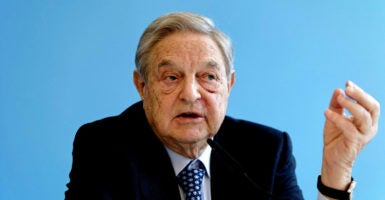 For additional proof that the State Department has no business teaming up overseas with the vast network funded by the billionaire George Soros, look no further than the portentously named Organized Crime and Corruption Reporting Project.

In words that could have come from John Lennon’s “Imagine,” its website further states: “Our organization doesn’t belong to any country, political philosophy or set of beliefs.”

It is, however, almost fully funded by Soros, a financier with a penchant for subsidizing radical causes around the world—with assistance from our own State Department.

At the bottom of nearly all its pages, it proudly displays the logos of Soros’ Open Society Foundations and the largest U.S. foreign aid agency, the U.S. Agency for International Development.

The OCCRP’s financial statements—publicly available on its website, here, here, and here—verify (1) the degree to which this outlet is funded by Soros’ Open Society Foundations, and (2) that the State Department is also a funder.

And now, this group bearing the imprimatur of the U.S. government—literally, on its website—is being used to target Republicans in Congress and conservative think tanks like The Heritage Foundation who have dared to question the nexus between Soros and the U.S. government.

An Unconscionable Use of Taxpayer Funds

Generally, Americans should be concerned that the U.S. government contributes funds to a media outlet. Our government exists to protect the free press among other liberties, not to fund and sponsor media inimical to America’s interests.

This was the case in a recent OCCRP report that purported to scrutinize The Heritage Foundation; Sen. Mike Lee, R-Utah; Rep. Chris Smith, R-N.J.; and others who have called on the Trump administration to investigate how much money USAID has given to Soros groups over the years, but especially under the Obama administration.

Nobody knows for sure how many millions in USAID taxpayer funds have gone into the Soros network, which is reason enough to call for a probe.

The OCCRP is credited with having done good work—for example, reporting on the suspicious death of the Russian whistleblower Sergei Magnitsky.

But the group’s new 10-page report, “How Macedonia’s Scandal-plagued Nationalists Lobbied America’s Right and Pulled Them Into an Anti-Soros Crusade,” is a tendentious, innuendo-filled, one-sided attack on those who are criticizing the OCCRP’s paymaster.

The third paragraph of the OCCRP report begins:

Conservative media outlets, such as Breitbart and Fox News, as well as the right-wing Heritage Foundation, have devoted considerable coverage to Soros’ alleged meddling in Macedonia.

Heritage is unapologetically conservative and defends American constitutional principles and traditions. Whether that constitutes “right-wing,” we’ll leave for the reader to parse.

But there is nothing “alleged” about Soros’ involvement in Macedonia. According to this Open Society Foundations fact sheet, the group spent $4 million in Macedonia in 2016, and a total of $98 million since 1992.

The article purports to establish some sort of link between those who oppose what Soros does around the world, and lobbyists that it says are paid by Macedonia’s conservative VMRO party.

The article accurately quotes one of us, senior fellow Mike Gonzalez, as saying that “it was ‘ludicrous’ to think that the Foundation’s work was linked to any lobbying effort.”

So far, so good. But proving unable to find any such link, the article then grasps for straws and resorts to the worst type of innuendo by insinuating some shadowy connection anyway:

However, there is evidence of personal links between Heritage and VMRO figures. Filip Jolevski, the son of Macedonia’s former Washington ambassador, Zoran Jolevski, worked for Heritage for a year between 2013 and 2014. The elder Jolevski met Heritage’s then-president, Jim DeMint, in July 2014, with both men sporting neckties bearing the foundation’s logo.

Is this really what our tax dollars are paying for?

Macedonian political leaders have indeed met with fellows at Heritage and congressional staffers, who were in fact doing their jobs.

One of the responsibilities of Washington think tank fellows is to meet with foreign officials when we travel overseas or when they come through Washington.

As such, we routinely meet with conservatives and liberals from Europe, Latin America, Asia, Africa, Australia, etc. We even meet with communist officials from China and Vietnam.

Regarding Putin, the OCCRP article revives an old canard frequently used to defend Soros: that to criticize Soros is to play into Putin’s hands.

It cites an article by Gonzalez, “We Don’t Have to Choose Between Putin and George Soros,” and says Heritage was “replying to criticism that the Heritage Foundation … was aligning with Kremlin propaganda.” “Gonzalez was unapologetic,” it adds.

This is a complete misrepresentation of the truth. As anyone who reads the article will be able to tell, it was written as a response to this article by Politico, which mentions neither Heritage nor Gonzalez.

The article merely pointed out that the inane trope, “the enemy of my enemy is my friend,” is a logical fallacy.

The Real Threat Posed by Soros

Soros, estimated to be the world’s 24th richest individual, has every right to fund his pet projects around the world as long as it is within the laws of those countries. These projects are at liberty to criticize the work of both Heritage and members of Congress.

That doesn’t mean the State Department and USAID, strapped for funds as they are, should be bolstering the power of Soros entities with taxpayer dollars.

Soros’ projects are political. They exist to fundamentally alter foreign societies through a variety of means: by supporting birth control, lobbying for drug legalization, and targeting political parties that oppose Soros’ mission.

We have not hidden our view that Soros represents a threat. He is trying to force his vision of a transnational, welfare-oriented society on nations around the world that remain conservative.

As we have said repeatedly, siding with Soros overseas often alienates centrist factions in these countries. It weakens the U.S. alliance with potential friends and pushes them into Putin’s arms.

Does the State Department really want to be part of that?

The OCCRP is a small piece of the Soros-State Department puzzle. But it proves that Lee and Smith were right to probe the issue.

Not only is the State Department funding an organization that owes its existence to Soros, but that group is now specifically targeting American politicians and American think tanks.

Imagine what it does overseas.