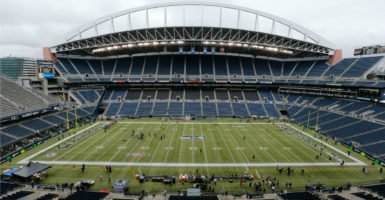 “The federal government is responsible for a lot of important functions, but financing sports stadiums for multi-million—sometimes billion—dollar franchises is definitely not one of them,” says Sen. James Lankford, R-Okla. (Photo: Ric Tapia/Icon SMI 269/Ric Tapia/Icon SMI/Newscom)

“The federal government is responsible for a lot of important functions, but financing sports stadiums for multi-million—sometimes billion—dollar franchises is definitely not one of them,” Lankford said in a statement. “Using billions of federal taxpayer dollars for the subsidization of private stadiums when we have real infrastructure needs in our country is not a good way to prioritize a limited amount of funds.”

According to a press release from Lankford’s office, “The bill would close a loophole in the tax code that allows professional sports teams to finance new stadiums with municipal bonds that are exempt from federal taxes.”

According to the U.S. Securities and Exchange Commission, municipal bonds are “debt securities issued by states, cities, counties and other governmental entities to fund day-to-day obligations and to finance capital projects such as building schools, highways or sewer systems.”

“The bottom line is that eliminating this cronyist tax preference is good policy,” said Sargent, who focuses on transportation and infrastructure policy. “The claims that stadium subsidies spur economic growth and create jobs have been debunked time and time again. Instead, they’re a handout to wealthy, connected companies at the expense of the American taxpayer.”

Researchers from the Brookings Institution have argued this practice wastes billions of taxpayer dollars.

“The federal government has subsidized newly constructed or majorly renovated professional sports stadiums to the tune of $3.2 billion federal taxpayer dollars since 2000,” wrote Alexander K. Gold, Austin J. Drukker, and Ted Gayer  in a 2016 Brookings report. “But because high-income bond holders receive a windfall gain for holding municipal bonds, the resulting loss in total revenue to the federal government is even larger at $3.7 billion.”

Professional teams have sometimes threatened to relocate if local governments do not offer public money to help renovate or rebuild stadiums.

This was “most recently seen with the Raiders leaving Oakland for the Las Vegas desert. All told, the Raiders were able to secure nearly $1 billion in subsidies to entice them to move,” wrote Charles Hughes of the Manhattan Institute in Economics21 in April.

Jeffrey Dorman, a contributor to Forbes.com, explained in January 2015 that the stadiums do not create economic opportunity for community members or even much extra tax revenue for local governments.

“In fact, local and state governments get new tax revenue from stadium-related events in only two ways: steering purchases toward activities with higher tax rates and taxing out-of-town visitors,” said Dorman. “… why should taxpayers pay so that a few favored businesses can see greater profits?”

Rep. Steve Russell, R-Okla., introduced a parallel bill in the House, the “No Tax Subsidies for Stadiums Act” in February. The latest action on the bill was a referral to the House Committee on Ways and Means that same month.