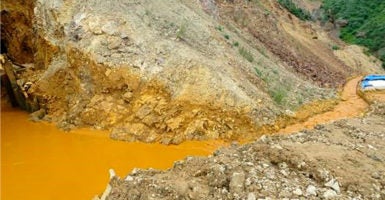 Yellow mine waste water is seen at the entrance to the Gold King Mine in San Juan County, Colorado, Aug. 5, 2015. (Photo: Handout/Reuters/Newscom)

A government watchdog reported Monday that the Environmental Protection Agency committed no wrongdoing in an environmental disaster, but the auditors ignored crucial inconsistencies in officials’ stories.

The EPA breached Colorado’s Gold King Mine on Aug. 5, 2015, resulting in an estimated 3 million gallons of toxic pollution being dumped into a river that provides drinking water for people living in three states and the Navajo Nation. The pollution turned the river water yellow for days after the initial dumping.

Officials “inadvertently” breached the mine due to a “misjudgment,” but they didn’t violate any “standards for the level of care,” since none existed, the EPA’s inspector general said in the report. The Department of Justice previously declined to prosecute the EPA employee responsible for the disaster after a yearlong inspector general investigation.

“On August 5th, 2015, the EPA’s on-scene coordinator was directing excavation operations to remove loose material to expose the bedrock above the collapsed mine portal for further assessment,” Tina Lovingood, an official with the EPA Office of Inspector General, said in a podcast. “But our team found that the EPA actually was not attempting to open the mine that day.”

Yet the account of a Department of the Interior employee involved at Gold King Mine, which The Daily Caller News Foundation reported in March 2016, contradicted the inspector general’s finding.

“On 8/5/2015, the EPA was attempting to relieve hydrologic pressure behind a naturally collapsed adit/portal of the Gold King Mine,” reads an attachment to an Aug. 7, 2015, email from Brent Lewis, head of the Bureau of Land Management’s abandoned mine program, to colleagues.

“The EPA’s plan was to slowly drain and treat enough mine water in order to access the inner mine working and assess options for controlling its discharge,” the attachment continued. “While removing small portions of the natural plug, the material catastrophically gave-way and released the mine water.”

Similarly, the inspector general discounted a peer review—done by Richard Olsen of the U.S. Army Corps of Engineers – of a so-called “independent” report released just two months after the incident.

“The Bureau of Reclamation (BOR) report stated that there was an ‘urgency to start digging out the plug,’ which implied the EPA was intentionally opening the mine on August 5, 2015,” the inspector general report said, citing a portion of the report by Olsen. “Our work shows the EPA was not attempting to open the mine the day of the release.”

The report doesn’t explain the reason for the contradiction, nor why Olsen believed the EPA was trying to breach the mine. Olsen was the only peer reviewer not associated with Department of the Interior and was told Bureau of Reclamation investigators were ordered to “stay clear” of issues surrounding the EPA’s potential negligence.

The inspector general also verified the bureau’s independence from the EPA without refuting The Daily Caller News Foundation’s contradictory findings.

“The EPA arranged for, but did not direct, Bureau of Reclamation staff and peer reviewers conducting the external assessment that the EPA requested,” Lovingood said in the podcast. “EPA officials ensured that the EPA did not control bureau staff or peer reviewers, because the EPA limited its interaction with them.”

But The Daily Caller News Foundation has reported extensively on other issues that raise serious questions about the Department of the Interior and the Bureau of Reclamation’s independence.

The department and nearly all of its subagencies were involved with work at and around Gold King Mine. The Bureau of Reclamation “received thousands of dollars from EPA,” according to a House Committee on Natural Resources February 2016 investigation.

In fact, the bureau report’s author was involved with Gold King Mine outside the review and was on site just days before the disaster. The Department of the Interior also owns part of the mine, and the EPA once considered holding the agency liable for pollution.

Additionally, the EPA may have impeded the inspector general’s review of the disaster by interviewing officials involved in a group setting with an agency spokeswoman present.

The inspector general did not respond to The Daily Caller News Foundation’s request for comment.