Trump’s Food Stamp Reform Would Close the Trap of Dependency 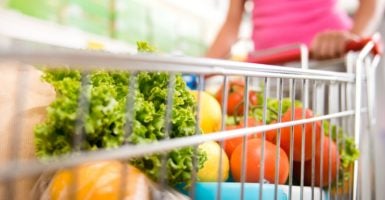 These claims are misleading.

In reality, the president’s proposed policy is based on two principles: requiring able-bodied adult recipients to work or prepare for work in exchange for benefits, and restoring minimal fiscal responsibility to state governments for the welfare programs they operate.

The president’s budget reasserts the basic concept that welfare should not be a one-way handout. Welfare should, instead, be based on reciprocal obligations between recipients and taxpayers.

Government should definitely support those who need assistance, but should expect recipients to engage in constructive activity in exchange for that assistance.

Under the Trump reform, recipients who cannot immediately find a job would be expected to engage in “work activation,” including supervised job searching, training, and community service.

This idea of a quid pro quo between welfare recipients and society has nearly universal support among the public.

Nearly 90 percent of the public agree that “able-bodied adults that receive cash, food, housing, and medical assistance should be required to work or prepare for work as a condition of receiving those government benefits.”

The outcomes were nearly identical across party lines, with 87 percent of Democrats and 94 percent of Republicans agreeing with this statement.

Establishing work requirements in welfare was the core principle of the welfare reform law enacted in the mid-1990s. That reform led to record drops in welfare dependence and child poverty. Employment among single mothers surged.

Despite the harsh impact of the Great Recession, much of the poverty reduction generated by welfare reform remains in effect to this day.

Unfortunately, though, welfare reform altered only one of more than 80 federal means-tested welfare programs. The other programs were left largely untouched. Trump’s plan is to extend the successful principle of work requirements to other programs.

The second element of Trump’s plan is to restore a minimal share of fiscal responsibility for welfare to state governments.

Last year, total federal and state spending on means-tested aid was over $1.1 trillion. (This sum does not include Social Security or Medicare.)

Some 75 percent of the $1.1 trillion in spending comes from the federal government. Moreover, nearly all state spending was focused in a single program: Medicaid.

Excluding Medicaid, the federal government picks up the tab for nearly 90 percent of all means-tested welfare spending in the U.S.

It makes no sense for the federal government to also bear 90 percent of the cost of cash, food, and housing programs for low-income persons.

But for decades, state governments have increasingly shifted fiscal responsibility for anti-poverty programs to the federal level. As a result, the federal government picks up nearly all the tab for welfare programs operated by the states.

This is a recipe for inefficiency and nonaccountability.

One of the key lessons from welfare reform—now 20 years ago—is that both blue and red state governments spend their own revenues far more prudently than they spend “free money” from Washington.

Efficiency in welfare requires state governments to have some fiscal responsibility for the welfare programs they operate.

A dirty secret in American politics is that many governors, both Republican and Democrat, regard this type of “free money” poured from Washington as a benign Keynesian stimulus to their local economies. The more spending, the better.

The Trump budget recognizes that the food stamp program will become more efficient if the state governments that operate the program have “skin in the game.” Therefore, it raises the required state contribution to food stamps incrementally from 8 percent to 25 percent.

By 2027, this would cost state governments an extra $14 billion per year. Half of the so-called “cuts” in food stamp spending in the Trump budget simply represent this modest shift from federal to state funding.

The remaining savings in food stamps in the Trump budget come from assumed reduction in welfare caseloads due to the proposed work requirement.

Today, there are some 4.2 million nonelderly able-bodied adults without dependent children currently receiving food stamp benefits. Few are employed. The cost of benefits to this group is around $8.5 billion per year.

In December 2014, Maine imposed a work requirement on this category of recipients. Under the policy, no recipient had his benefits simply cut. Instead, recipients were required to undertake state-provided training or to work in community service six hours per week.

Nearly all affected recipients chose to leave the program rather than participate in training or community service. As a result, the Maine caseload of able-bodied adults without dependent children dropped 80 percent in just a few months.

A similar work requirement for able-bodied adults without dependents, imposed nationwide, would save the taxpayer $80 billion over the next decade.

Even this would be a pittance compared to the $3.6 trillion the federal government will spend on cash, food, and housing benefits over that period.

The Trump policy is the exact opposite of so-called “block grants” in welfare.

In a welfare block grant, the federal government collects tax revenue and dumps money on state governments to spend as they will.

Instead of block grants, Trump is seeking to reanimate the principles of welfare reform from the 1990s that emphasized work requirements and renewed fiscal responsibility from state governments.

Of course, the left adamantly opposed welfare reform in the 1990s. In their view, welfare should be unconditional. Recipients should be entitled to cash, free food, free housing, and medical care without any behavioral conditions.

No wonder they have proclaimed Trump’s proposal to be “devastating” and a “horror.”

Contrary to protestations from the left, the U.S. welfare state is very large and expensive. For example, federal spending on cash, food, and housing benefits for families with children is nearly three times the amount needed to raise all families above the poverty level.

But the current welfare state is very inefficient. Trump seeks to reform that system.

In Trump’s unfolding design, welfare should be synergistic. Aid should complement and reinforce self-support through work and marriage rather than penalizing and displacing those efforts.

A welfare state founded on this synergistic principle would be more efficient than the current system. It would reduce both dependence and poverty.

More importantly, it would improve the well-being of the poor who have benefited little from the fractured families, nonemployment, dependence, and social marginalization fostered by the current welfare state.