Professor Receives Over $200,000 to Study Microaggressions 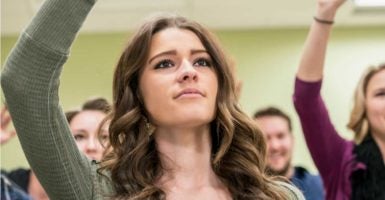 A science and mathematics education professor at the University of Georgia received $229,061 to study microaggressions and their implications. (Photo: Hill Street Studios/Scott Libolt)

The National Science Foundation awarded a professor over $200,000 to research microaggressions. Specifically, her research seeks to identify how microagressions keep racial minorities from comprising a larger chunk of science, technology, engineering, and mathematics jobs, and it seeks ways to improve minority representation in these fields.

Mary Atwater, a science and mathematics education professor at the University of Georgia, received $229,061 to study microaggressions and their implications, according to a statement the university released Monday.

“This grant can have an impact on the number of African-American and Latino/a faculty members we have in science education,” Atwater said in the university’s statement.

A “microaggression” is “a comment or action that subtly and often unconsciously or unintentionally expresses a prejudiced attitude toward a member of a marginalized group (such as a racial minority),” as defined by Merriam-Webster. For example, asking a person their ethnic background would be a microagression.

The professor will study “microaggressors,” which are presumably the perpetrators of microaggressions, across the science education programs of seven different universities. Atwater plans to recruit the aid of a few University of Georgia and Columbia University graduate students to create the study, which will use “critical race theory,” as well as its complementary implicit attitude exams and interviews.

The Daily Caller News Foundation reached out to Atwater and the National Science Foundation but did not receive a comment in time for publication.