FCC’s Pai Defiant After Liberal Intimidation: ‘Folks Are Just Going to Oppose Whatever I Do’ 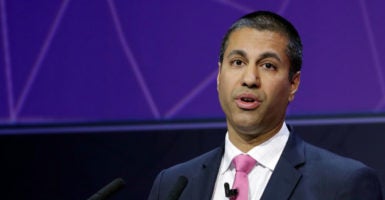 The new Federal Communications Commission Chairman Ajit Pai is not very popular with the left these days.

His crime? He believes the free market, not the government, should determine the future of the internet.

So aggrieved are the proponents of government-knows-best policies that they have taken to lambasting him on late-night talk shows, mean tweets, and even staged a “vigil to save the internet” outside his home on Mother’s Day.

But Pai tells The Daily Signal he’s committed to rolling back Obama-era regulations and restoring a “light touch” at the FCC.